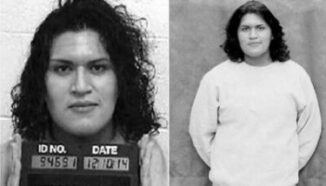 Adree Edmo is a transgender woman in prison for sexual assault of a minor. She has won an appeal to force Idaho corrections authorities to perform a gender reassignment surgery.

Adree Edmo is previously known as Mason Dean Edmo. After prevailing in federal court, Edmo said in a statement issued by the National Center for Lesbian Rights, I am relieved and grateful the court recognized my right to necessary medical treatment, and that I will get the surgery I need.

I hope my case helps the State of Idaho understand that they can’t deny medical care to transgender people.

Adree has been incarcerated since pleading guilty in 2012 to sexual abuse of a 15-year-old male at a house party.

Court documents read that Adree has viewed herself as female since age 5 or 6. She struggled with her gender identity as a child and teenager, resenting herself intermittently as female, but around age 20 or 21 she began living full-time as a woman. Adree was diagnosed in prison with gender dysphoria.

She changed her legal name to Adree Adree and the sex on her birth certificate to female and while in prison consistently presented as female, despite receiving many disciplinary offense reports for doing so, court records show. She was disciplined for wearing makeup and feminine hairstyles.

#BREAKING! The 9th Circuit Court of Appeals has ruled that the Idaho Department of Corrections (IDOC) must provide medically necessary gender confirmation surgery to our client, Adree Edmo, a transgender woman! https://t.co/h5Fd846CFQ pic.twitter.com/Oj9v4BkGZV

She has been given hormone therapy but federal court records show that having male genitals caused her to be depressed, embarrassed, and disgusted.

Medical records noted she bought underwear to keep her disgusting penis out of sight. Suffering from depression, anxiety, and substance abuse disorder, Edmo has been treated for past trauma and previous suicide attempts.

In 2015, she attempted to castrate herself for the first time using a disposable razor blade. Before doing so, she left a note to alert officials that she was not ‘trying to commit suicide,’ and was instead ‘only trying to help’ herself.

Brady Summers was the victim in the Edmo sexual assault case. Summers told local media in December of 2018 that Edmo …never once indicated anything of gender dysphoria or sexual indifference. He was a predator. He, on several occasions, had his way with me. It was brutal.

After coming forward last year, Summers wrote on Facebook, I love each and every one of you for your support. I’m sure you all have had a secret or burden yourself in one way or another. I want to thank you for supporting mine.

Since I have voiced something I’ve kept a secret, I’ve been on an emotional roller coaster. Each and every one of you has helped me feel less ashamed of being abused. However, I have to turn off the notifications for this post.

I have been attacked, harassed, and disrespected by people I’ve never met in private messages and texts. I am pretty strong-minded but I wasn’t ready for this backlash. I love you all and thank you for helping me release a 10-year burden, and help you with doing something right. Thank you