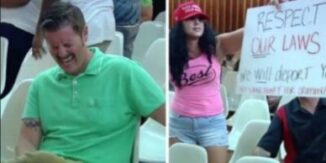 Alex Kack is a 28-year-old field organizer for Peoples Defense Initiative. He goes viral on Twitter as #GreenShirtGuy after a video showing him hysterically laughing at a pair of Trump supporters circulated widely online.

Many people began to leave during the woman’s speech, and eventually, a police officer escorted her and the man outside.

But all the while Kack, now known online as “Green Shirt Guy,” remained seated in the front row and literally bobbed up and down from laughing so hard.

After Tucson reporter Nick VinZant shared the clip on Twitter, #GreenShirtGuy started to trend, and it wasn’t long before Kack revealed himself as the beloved City Council meeting hero.

I want to be friends with the green shirt guy!

He works specifically with Tucson Families Free and Together on the sanctuary city measure, so he was at the meeting with colleagues from the campaign to support it.

Please give green shirt dude a medal, lunch, drinks & hugs when you see him.

Don’t get me wrong, I love #GreenShirtGuy as much as anyone…but I REALLY need to know the story behind #BanjoDude pic.twitter.com/fTCRv2BIN2

Since the footage of his laughter went viral, Kack described the online response as absolutely surreal.

Patton Oswalt tweeted about it and I love Patton Oswalt. Doesn’t get any better than that right?” he said.

#GreenShirtGuy is @Alex_Kack. And I love him. I love you @Alex_Kack. Please promise me you will befriend Banjo Man, walk the earth together, and get into adventures. https://t.co/nQMLdcwsAS

It should be noted that Kack has reportedly participated in several Arizona political campaigns before, and also taken part in political comedy shows, like this one called Laughing Liberally.

You have to consider the possibility that his very liberal laughter at the meeting could have been for show, but Twitter users were in the mood for a hero, and Kack delivered.

Now that we have the #GreenShirtGuy mystery solved, perhaps Kack can team up with this similarly iconic Banjo Dude next meeting.