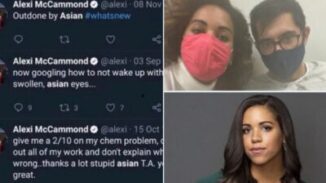 Alexi McCammond is an American Political reporter and New Teen Vogue editor-in-chief who resigns over past racist tweets about Asians. Alexi announced on Thursday afternoon that she will not become the top editor of Condé Nast’s publication Teen Vogue after a backlash over anti-Asian tweets she had written as a college student in 2011. She had been set to start in the role on March 24.

Here’s the memo from Condé Nast Chief People Officer Stan Duncan that said management was well aware of the tweets during the interview process and had been “straightforward and transparent” https://t.co/5NANWcbdCc pic.twitter.com/kyg1mjHTUC

She covered President Biden’s campaign for Axios and was a contributor to MSNBC and NBC. In 2019, she was named the year’s emerging journalist by the National Association of Black Journalists. She would have been the third Black woman to serve as Teen Vogue’s top editor after Lindsay Peoples Wagner and Elaine Welteroth.

Alexi McCammond was born and raised in Chicago, Illinois and now 27-year-old. She lived with her father, Mother Shelli McCammond, and two siblings – brother Braxton and sister Aubyn. Aubyn is a registered nurse.

Alexi attended Guilford High School in Rockford. Later, she headed to the University of Chicago in 2011 and completed her Bachelor’s degree in ‘Sociology, Romance Languages & Literature.’

She worked as a political reporter for four months at ‘The Gate Undergraduate Political Review’ during her studies.

Initially, Alexi wanted to go to university and become a doctor, but sadly her father lost his manufacturing job during her junior year, so she was worried about paying tuition fees. Luckily, she earned a full four-year academic scholarship to attend the University of Chicago, which amounted to 60,000 dollars a year, taking care of her housing rent, tuition, and books.

In June 2020, Alexi got engaged to her boyfriend, Matt Kuncman. In the past, she has dated Rob Groulx, a filmmaker from Washington D.C. The pair started dating back in 2017 and would often post pictures together on social media platforms.

Alexi started off her career as a digital editorial intern & a freelance political writer for the Cosmopolitan magazine.
In 2016, she started working for Bustle, an online American women’s magazine, concentrating on politics and news.
She got promoted to an associate news editor at Bustle and covered the 2016 presidential debates. Currently, Alexi works as a political editor for Axios, an American information and news outlet. She is also Axios’ deputy news desk editor.

Alexi has appeared on MSNBC, WJLA (ABC affiliate in Washington), WNYC (a public radio station in New York), and Fox Business. Alexi has appeared in various TV documentaries and was the host of a short series titled ‘Love, Factually’ in 2016. The shows that she has appeared on include ‘MSNBC Live,’ ‘Kasie DC,’ ‘The Beat with Ari Melber, ’ etc.

In Sep 2016, she had written a thought-provoking article on Bustle titled – ‘My Dad Is An Unarmed Black Man: Will He Be Shot Next?.’ In the piece, she spoke about her father, who is 6′ 3” tall & is actually half-white, but it is irrelevant to the police officer…for them; he is black. The National Association of Black Journalists (NABJ) named her as 2019 Emerging Journalist of the Year & was honored in Miami.

Back in 2019, Alexi had tweeted that NBA player/commentator Charles Barkley had said to her – “I don’t hit women, but if I did, I would hit you.” Charles later apologized for the statement, saying that it was a lousy attempt at making a joke.

Alexi McCammond, who made her name as a politics reporter at the Washington news site Axios, had planned to start as the editor in chief of Teen Vogue next Wednesday. Now, after Teen Vogue staff members publicly condemned racist and homophobic tweets Ms. McCammond had posted a decade ago, she has resigned from the job.

Condé Nast, Teen Vogue’s publisher, announced the abrupt turn on Thursday in an internal email sent amid pressure from the publication’s staff, readers, and at least two advertisers, just two weeks after the company appointed her the position.

“After speaking with Alexi this morning, we agreed that it was best to part ways, so as to not overshadow the important work happening at Teen Vogue,” Stan Duncan, the chief people officer at Condé Nast, said in the email, which was obtained by The New York Times.

In a statement included in the email, Ms. McCammond said her “past tweets have overshadowed the work I’ve done to highlight the people and issues that I care about.”

“I wish the talented team at Teen Vogue the absolute best moving forward,” she said.