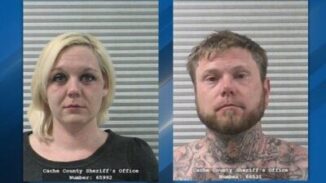 Amanda Noverr is identified as the woman who killed a couple of James Butler and Michelle Butler. The couple was found dead last week on Padre Island, near Corpus Christi.

Police identified Amanda Noverr as the woman who was with Adam Curtis Williams when he was photographed driving over the border into Mexico with the Butlers’ RV and truck.

Adam Curtis Williams is identified from Texas authorities as to the man who was seen driving James and Michelle Butler’s RV and truck over the border into Mexico. He is involved in the killings of a New Hampshire couple whose bodies were found last week on a beach near Corpus Christi.

#BOLO! Suspects in murder of RV’ers James & Michelle Butler! ADAM CURTIS WILLIAMS AND AMANDA NOVERR, originally from Utah. Keep your eye out & pass it on.

I don't want these "people" to have one night rest. I want them to know that we won't stop until they are caged. pic.twitter.com/LMPL9DOZol

According To Court, records show that she was convicted of public intoxication and misdemeanor assault in Logan County in 2012.

Adam Williams had a lengthy criminal history in Utah, including spending significant time in federal prison for drug trafficking and firearm possession.

He pleaded guilty and said he was carrying the firearms for protection while distributing drugs. In December 2018, after serving time in jail since 2010, he was released on supervised release.

He later violated that release when he was found with heroin. In August 2019, more allegations were being filed against him, including rape.

Two people were spotted on surveillance footage crossing into Mexico in the RV and truck belonging to a slain New Hampshire couple found buried on a Texas beach.

James Butler, 48, and Michelle Butler, 46, were found dead last week on Padre Island, near Corpus Christi. Michelle’s body was found in a shallow grave buried on top of her husband’s, investigators announced on Friday. Their deaths are being investigated as homicides.

The couple had been traveling around the country in a truck and RV trailer. Video footage has captured two people, a man, and women, driving the slain couple’s vehicles over the U.S.-Mexico border between October 20 and 21. Both are being called persons of interest.

The sheriff’s office has released a photograph of them in which the man is more visible; he has gauges in his ears.