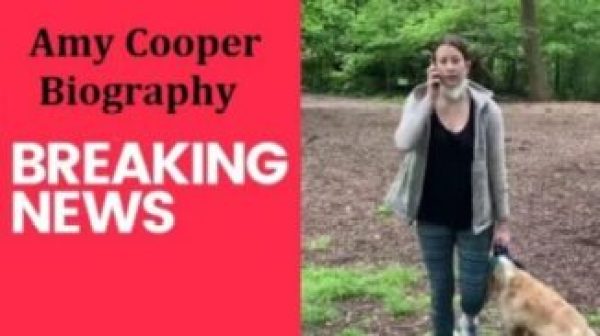 Amy Cooper is a white woman from New York. She was recorded in a viral video calling the police on a black man who asked her to leash her dog in the Ramble section of Central Park on Memorial Day.

According to NBC New York, Cooper called the NYPD and accused a black man of threatening her and her dog after an exchange that started when the man asked the woman to leash her dog in Central Park. Christian Cooper [unrelated to Amy Cooper] captured part of the exchange in a now-viral video below.

Amy Cooper works as a vice president and head of investment solutions at Franklin Templeton Investments in New York City, according to her now-deleted LinkedIn profile. She has worked there since 2015 and has also been a fixed income portfolio manager.

According to her profile, “Amy M. Cooper leads the insurance portfolio management and strategy business at Franklin Templeton. She has dedicated her career to delivering and executing investment solutions for insurance and pension companies globally. … She is a recognized industry leader in insurance accounting and regulatory issues, asset-liability management, and strategic asset allocation. She has worked in a variety of insurance-focused roles.”

Amy Marie Cooper, a native of Canada, according to her Instagram profile, studied at the University of Waterloo in Ontario from 1998 to 2003, graduating with a degree in actuarial science. She also completed her master’s in business administration in analytical finance at the University of Chicago Booth School of Business in 2009. Before working at Franklin Templeton, Amy Cooper worked at AIG, Citi, Lehman Brothers, and Willis Towers Watson.

Amy Cooper’s dog is a cocker spaniel named Henry. According to a Facebook post by Abandoned Angels Cocker Spaniel Rescue, Inc., Amy Cooper adopted the dog in March 2018 after her previous cocker spaniel, Ollie, died. The New York-based dog rescued called Cooper a “dedicated foster,” and wrote, “Of course she has been heartbroken. We congratulate Amy on her adoption of Henry and wish them a lifetime of happiness together. May his puppy love help to mend her broken heart.”

The video also shows Amy Cooper’s dog appearing to choke and struggle against his collar while Cooper made a 911 call. No one was arrested, and it is not clear if police are planning to investigate the incident further. Amy Cooper apologized in a statement to NBC New York, saying she overreacted but felt threatened. She told CNN, “I’m not a racist. I did not mean to harm that man in any way.” She told CNN her “entire life is being destroyed right now.”

Amy Cooper, who was initially identified by her dog walkers and did not respond to a request for comment from Heavy, works at Franklin Templeton Investments, a multi-billion-dollar asset management firm. The company issued a statement Monday night saying, “We take these matters very seriously and we do not condone racism of any kind. While we are in the process of investigating the situation, the employee involved has been put on administrative leave.”

On Facebook, Christian Cooper wrote, “Central Park this morning: This woman’s dog is tearing through the plantings in the Ramble.” He described the conversation he says occurred before he began recording with his cell phone:

Who is Christian Cooper

Christian Cooper is 57 years old a former Marvel Comics editor and writer who now works as the senior biomedical editor at Health Science Communications. Christian Cooper is a birder and says he often watches birds in Central Park, which is what he said he was doing before the Memorial Day encounter with the other Cooper. The video’s spread was helped by a tweet by his sister, Melody, a science fiction and horror writer who has worked at CW and HBO.

Amy Cooper deleted her personal Instagram profile after making it private and also changed the name of her dog’s page and made that private. Her LinkedIn profile was also taken down Monday evening as scrutiny on her intensified.

In addition to her pages being down, Franklin Templeton’s website crashed Monday night.

Amy Cooper told NBC New York Monday night, “When I think about the police, I’m such a blessed person. I’ve come to realize especially today that I think of [the police] as a protection agency, and unfortunately, this has caused me to realize that there are so many people in this country that don’t have that luxury.”

She told CNN she meant no harm to Christian Cooper or the African-American community. Amy Cooper told the news network, “I think I was just scared. When you’re alone in the Ramble, you don’t know what’s happening. It’s not excusable, it’s not defensible.”