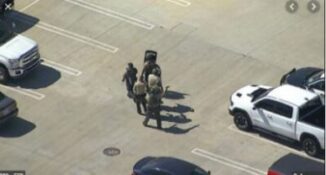 Angel Reinosa was a rookie Los Angeles County Sheriff’s deputy, who was shot by a sniper he said was firing from a perch in a four-story building.

Department of Los Angeles County Sheriff’s deputy admitted that he was not shot at from the apartment complex area as he previously claimed, Capt. Kent Wegener said during a news conference on the evening of August 24, 2019.

Deputy Angel Reinosa made it up. Official called his story "completely fabricated," says he cut two holes in his shirt, but detectives asked to see his wounds today and they saw no visible injury. pic.twitter.com/oqB1YCPkQ5

A sniper shot one of our deputies as he was leaving the station, said Lancaster Mayor R. Rex Parris, in a press conference before Reinosa stood accused.

The bullet came from a four-story apartment that caters to, is designed for, allows mentally ill people to live there, that’s all that lives there. Mentally ill people, it was previously claimed.

At the time, the mayor characterized the shooting as random.

Angel Reinosa was on training status and was a relatively new deputy who is only 21-years-old, said Wegener.

The deputy has indicated that he fabricated the whole thing. So there was no crime. There were no shots fired, Wegener said.

Reinosa was treated for what authorities termed a grazing gunshot wound at the time because that’s what he reported.

The wound did not penetrate his skin. It was a contusion, a bruise, said Wegener, who added, We cleared the whole apartment complex.

We thought we had an armed sniper…When a police officer has been shot, shot at, we respond in force.

hundreds of deputy sheriffs, not to mention that the citizens of Lancaster were incredibly inconvenienced.

A possible sniper is on the run after wounding a Los Angeles County sheriff's deputy in Southern California https://t.co/mof4qU6RPM pic.twitter.com/5bW3X0EPz0

Mayor of Lancaster says an @LASDHQ #deputy was shot by a #SNIPER.

Manhunt on for sniper who shot sheriff's deputy in shoulder at Lancaster station | https://t.co/qrSisSeFDB https://t.co/5gkmzNwCPF