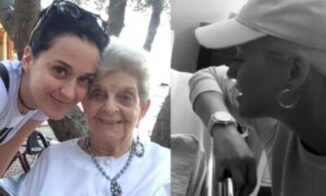 According to Biography of Ann Pearl Hudson, She was the Grandmother of American singer-songwriter Katy Perry. She was born in 1921 and died on 8 March 2020 at the age of 99.

Who was Ann Pearl Hudson

According to Perry Post, She was a fighter. She survived the Great Depression, raised 3 kids on her own as a seamstress, making G strings for showgirls and other such characters in Vegas,” Perry wrote. “She was always authentically herself, funny and full of all the sweet cosy things you think of when you think of grandmas. She gave me crisp dollar bills in hallmark cards, she let us eat her favourite almond cookies from the 99 cent store while we asked questions about the different fans she had on display on her walls. She was a wonderful grandma and I will forever carry some of her in me.”

Katy Perry has revealed her grandmother has passed away aged 99. The singer, broke the news on Twitter on Monday morning, just days after she announced she was expecting her first child with actor fiancé Orlando Bloom.

The pop star announced the matriarch’s death with an emotional tribute post on Monday morning, just days after revealing her pregnancy.

“I don’t know when a soul enters a new vehicle but if there is an afterlife where there’s a waiting room of the coming and going my mind wonders if the soul that is waiting to come into my world is getting a kiss on the forehead from my sweet Grandma that departed this earth yesterday,” she wrote in her lengthy post. “My heart hopes so.”

“If she is able to speak with the soul is waiting for the conversation would probably include ‘are sure you wanna pick this wild group?!’” the singer, 35, joked. “There would most definitely be some sarcasm, a witty quip or two… tbh grandma probably had a glass of her favourite blush wine ready upon arrival to this afterlife… and a most fashionable look, jewels included, naturally.”