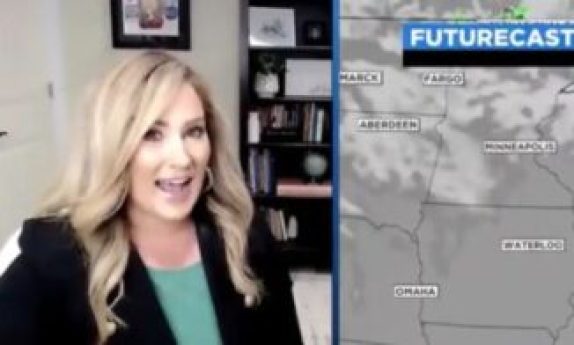 April Moss is a News Reporter for CBS News and also a meteorologist. She said during an on-air weather report. She made accusations about “discrimination” at the station to Project Veritas.

Moss of CBS 62 in Detroit, interrupted her weather report live on air on Sunday to announce that she will be sitting down for an interview with the activist group Project Veritas.

She was born on April 15, 1983, in Maryland, graduated from Central Michigan University in 2005 with a degree in broadcast journalism, according to her LinkedIn profile. She is 38 years old as of 2021.

Moss, who is a member of the National Weather Association, recently continued her education at Pennsylvania State University, where she studied Meteorological and Atmospheric Science from 2019 to 2020, according to her profile on the CBS 62 website.

While at university, she filled a variety of on-air positions for News Central 34, a student broadcasting channel at the facility, and was a member of the coed cheer team for both football and basketball.

While at university, Moss also interned at the NBC affiliate WBAL-TV 11 in Baltimore, where she first discovered her passion for broadcasting, according to a profile in 2016 on the CW50, a sister channel of CBS 62.

Moss’ CBS biography says that she then joined the Detroit-based network in 2012 and has since worked in a variety of different roles.

During her nine years at the station, Moss has worked as a fill-in news anchor, reporting for Eye on Detroit and as a host for StreetBeat on the station’s sister channel.

Since 2020, Moss has also been working as a weekend meteorologist for CBS 62, alongside a variety of other roles, including a fill-in traffic reporter and news anchor for the station’s morning show. She has also served as a writer and producer.

At the time of the CW50 profile in 2016, Moss lived in Macomb County in Metro Detroit with her husband and three children, all boys, and spent a majority of her free time with friends or volunteering at her local church. Her social media channels show that she now has a fourth child, also a boy.

Moss interrupted her Sunday night forecast to tell viewers about her upcoming interview with Project Veritas.

She began the segment, which was being broadcasted from her Macomb County, Michigan, home, normally, saying, “Good evening and thanks for watching ‘First Forecast,’ I’m meteorologist April Moss and happy Father’s Day.

Today we saw temperatures above normal again, topping out at 85 degrees at Metro airport. Plenty of sunshine today. But all good things must come to an end and that starts as early as tomorrow morning, with showers moving in around 8 a.m.”

She then transitioned, saying, “And speaking of a brand new week, I will be sitting down this week with Project Veritas to discuss the discrimination that CBS is enforcing on its employees.

Tune in to Project Veritas for my full story. Now, later Monday we will share those showers continuing through late morning. But by evening we’ll see dry conditions and more comfortable temperatures as well.

"I will be sitting down this week with Project Veritas…”#CBS62Whistleblower pic.twitter.com/4roVL9KNXS