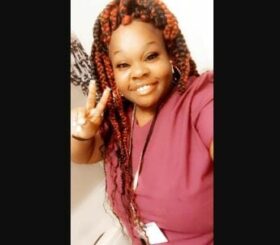 Ashlee Sierra Sims, a Mississippi woman, has recorded her own death after trying to retrieve her phone on I-55 in Jackson. According to the news station WLBT, the Jackson Police Department is investigating the incident, which took place at around 9 p.m. on July 28.

Sims’ Facebook page says she was originally from Chicago but was based in Jackson, Mississippi. The Facebook Live video is still on her account, which has been memorialized as “Remembering Ashlee Sierra Sims.” Her Facebook bio reads, “MommyOf2, HALF BLK HALF SAVAGE. I CANT RELATE TO THE FAKE !!!”

She used a frame for one of her Facebook pictures that says, “I can’t stay home. I’m an essential worker.” Her Facebook page includes pictures of her children with “I love my kids” frames and posts about her children’s upcoming birthdays.

On July 28 she discussed an upcoming Spiderman and unicorn party she was planning for her children, writing “Ashton And Zari 5th & 7th BIRTHDAY PARTY GONE BE LITTY!!! I TOLD YALL MAMA GOT YALL FOREVER ♾ 2PARTIES IN 1 HELL YEAHHHHH ITS UPPPPPPPP! THE UNICORNS & SPIDER-MANS ARE IN FULL AFFECT.”

She also posted pictures from family events including her cousin’s baby shower. “Big Shout To My Sister Shetogie Sims For Decorating FOR MY LIL COUSIN BABY COUSIN SHOWER Soufside Bri !!! ITS BEAUTIFUL AF”

In another post from July, Sims wrote, “I’m Here Physically But My Mind Is Stuck & ELSE WHERE! MAN BEHIND THIS SMILE IS ANGER , RAGE, HURT,FRUSTRATION,EMPTINESS & IM NOT ALRIGHT. I JUST NEED YOU LORD!”

According to the WLBT report, Sims was streaming on Facebook Live when her phone fell out of the window of the car she was driving on the I-55 South near Briarwood Drive in Hinds County.

When she exited the car to retrieve the phone, she was fatally struck by another vehicle. The video, which has been viewed nearly a million times, is available here. Viewer discretion is advised.

Sims, who appears to be in the driver’s seat of the moving vehicle, is singing and rapping to the song “Goin Straight In” by rapper Finese2tymes in the video clip until the phone is knocked out of her hand and into the street.

The lyrics of the song include, “Your playing Russian roulette … / Whoever thought I was next / Social media a mess.”

After the phone hits the road, the clip continues for another five minutes, and eventually, the ‘Find My iPhone’ app alarm is heard. About one minute from the end of the video, a scream and thump can be heard, followed by screeching tires, car horns, and repeated screams until the video ends.