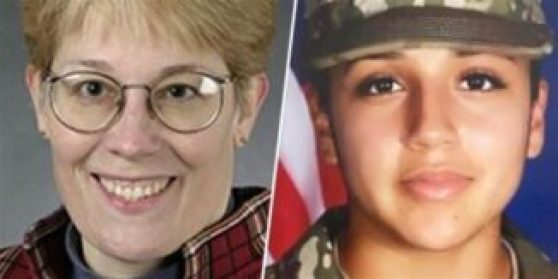 Betsy Schoeller is a former University of Wisconsin-Milwaukee instructor and retired Air National Guard colonel. She posted comments on Facebook in response to an article about Guillen’s killing, saying sexual harassment is the price of admission for women in the military, and “if you’re gonna cry like a snowflake about it, you’re gonna pay the price.

Her comments drew backlash and were condemned by university officials in a statement Saturday as “beyond thoughtless” and “repugnant.”

“UWM in no way condones Ms. Schoeller’s comments, and we understand and empathize with the outrage and concerns we are hearing,” the statement said. “There can be no excuse or rationalization for the killing of SPC Guillen and the circumstances surrounding this tragedy.”

The university also said there were legal reasons it could not fire Schoeller “for her social media postings, as some have demanded” and that it cannot regulate the private speech of its employees.

An online petition launched Friday by a UW-Milwaukee student calling for Schoeller to be terminated has more than 133,000 signatures.

Schoeller released a statement Sunday through UW-Milwaukee, where she is a senior lecturer at the School of Information Studies, in which she offered her condolences to Guillen’s relatives and sympathy to all victims of sexual assault and harassment.

Schoeller, 58, said that she did not mean to imply that this is how she feels and that she is sorry her words were misinterpreted. She did not immediately return a request for an interview Monday.

“Because it isn’t just sexual harassment. That’s just the beginning,” the statement said. “Then comes the agonizing decision about reporting. Or not reporting. The pressure applied by friends who know about it and only want to help. Having to ultimately stand up to that culture of sexual harassment on your own.”

Schoeller has taught at the university for 23 years, according to The Milwaukee Journal Sentinel.

Who is Vanessa Guillen

Guillen, 20, disappeared at Fort Hood on April 22. Partial human remains found last week near the Leon River in Central Texas were confirmed to be those of Guillen, a family lawyer said Sunday. Private Guillen’s family has been demanding answers since she disappeared. They have said Guillen told them she was sexually harassed. In June, officials at Fort Hood announced that they had appointed a team to investigate those accusations.

Schoeller said in her statement released Sunday that she has seen the toll sexual harassment takes on individuals and entire military units.

“The point I was making is that this is what women are facing in a culture of sexual harassment and misogyny,” Schoeller said. “It’s not easy to be a woman in the military. Not easy at all. There are some men who have adapted to the idea of working alongside women, but there are just as many who have not.”

Schoeller said that she has “seen many attempts to squash this harassment culture from the military,” such as zero tolerance, reporting procedures, sensitivity training, discussions, focus groups, and role-playing.