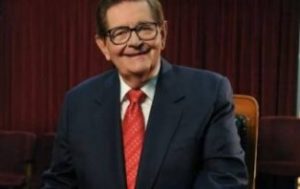 Bill Collins was once an Australian movie critic and film historian, radio and tv presenter, journalist, author, and lecturer.

He was excellent regarded for imparting synopses of Hollywood videos in Australia. He specialized in the Classical Hollywood cinema, and his favored movie was Gone with the Wind.

Bill Collins was born on 4 December 1934 and died on 20 June 2019. He has died on at the age 84. Bill Collins used to be born in Sutherland, Sydney, the son of a policeman and school teacher. He was educated at Canterbury Boys’ High School and the University of Sydney, the place he got a Bachelor of Arts with Honours in Latin, a Diploma of Education in 1960 and a Master of Education in 1965.