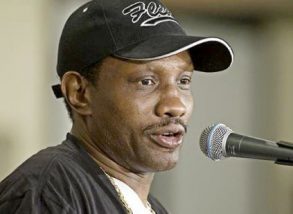 Boxer Pernell Whitaker was born on 2 January 1964 in Norfolk, USA. He has died at the age of 55 in a car accident.

Pernell ‘Sweetpea’ Whitaker tied the knot with his ex-wife, Rovanda On December 21st, 1985 in a Boxing ring in the Norfolk area televised on ABC at 3 p.m. EST. The wedding took place in front of thousands of fans. In a 1985 article by UPI, Anthony said: “I always wanted a church wedding. But since we can’t seem to keep Pete out of the boxing ring, I guess this is the best place.”

The wedding ceremony was followed by five eight-round bouts in what was termed as the ‘largest wedding in the Norfolk area,’ saidDan Duva, Whitaker’s fight promoter in a statement before their wedding said: “They got the idea after they saw (sports commentator) Ahmad Rashad propose to his girlfriend two weeks ago. They thought if he can propose on national television, then they could get married on national TV.”

Rovanda and Whitaker had four children together: Dominique, the late Pernell Jr., Dantavious, and Devon. Whitaker also had a daughter, Tiara, from a prior relationship.

On 14th July 2019, Pernell was crossing the street in Virginia Beach, at the intersection of Northampton Boulevard and Baker Road, when he was struck by a vehicle. He ultimately died of injuries he’d sustained from the accident.

Whitaker, unfortunately, succumbed to his injuries and died. Cops are investigating. Unclear if the driver of the car was arrested but he did stay on the scene to speak with police. It’s NOT a hit and run situation.

According to reports, Pernell Whitaker has died after being hit by a vehicle.