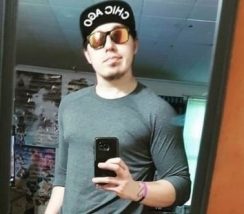 Brandon Clark was born in 1998. He is the Killer of famous Instagrammer Bianca Devins. Utica Police found Clark on 14 July 2019 outside of an SUV.

Why He killed Bianca Devins ??

He had said he was suicidal and told police he had killed his girlfriend and was going to harm himself with a knife, the news station reports.

Police said they were able to stop him and he was taken into custody before being brought to the hospital with significant cuts and lacerations.

Clark also posted photos of himself, showing his bloody arms and cuts, and a photo next to Devins’ covered body with the caption, I’m sorry Bianca.

He had earlier shared an Instagram photo while driving saying Her comes Hell. It’s redemption, right?

Clark was taken to St. Elizabeth Campus of the Mohawk Valley Health System and was in surgery Sunday morning, the Utica Observer-Dispatch reported.

According to NBC New York, police said the suspect was out of surgery by Monday, but was sedated and could not speak to officers. Charges have not been filed yet.

On Facebook, where Clark uses the name Brandon Kowalski, he wrote, I’m ending it today. I’m sorry to all the family and friends who wanted me to achieve. I love you all.”

Clark’s brother, James Ward, confirmed on Instagram that Brandon was the suspect in Devins’ death.

He wrote, Shoutout to all the people who target someone’s family and blame them for a person’s decisions.

Nothing better than waking up at 4am to find out your brother killed someone and tried to kill himself, and when you’re trying to understand and comprehend how the person you looked up to and taught you so much is responsible for such a horrible act, and people proceed to go out and blame you for what he did.”

He added, So here I am stationed in Alaska for military service wanting nothing more than to wake up and be back home hoping this is some sick twisted nightmare, instead I’m all the way across the country.

I’m deeply sorry something like this came from my family and my heart goes out for the family of the victim, but think about when his little sister and brothers find out what a disgusting thing he’s done, and get blamed for it. They’re kids.”