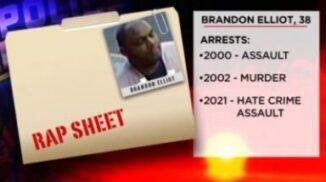 According to Brandon Elliot Biography and Wiki, He identified as the suspect of the brutal attack of a 65 years old Filipino woman Vilma Kari. He was taken into custody on 30/3/2021 Tuesday night. As a local homeless person, Elliot was identified by residents, and multiple Crimestoppers tips directed police to a hotel serving as a homeless shelter on West 40th Street.


Thanks to assistance from the public and excellent investigative work by @NYPDHateCrimes Detectives, the individual wanted for Monday’s assault of a 65 year-old Asian female, at 360 West 43rd St, was arrested and charged with Felony Assault as a Hate Crime. pic.twitter.com/ZQRVGZEAb2

Elliot was arrested in 2000 for robbery and 2002 for murder, according to police. The Associated Press reports that Elliot was convicted of stabbing his mother to death in the Bronx when he was 19 and is on lifetime parole after being released from prison in 2019. When Elliot was 17, police arrested him for choking his mother and ripping off her jewelry in a fight over money.

The victim of this brutal attack was 65 years old Filippino woman Vilma Kari. She was walking up to the suspect in the moments leading up to his attack when she allegedly said, “Fuck off, you’re not here. The victim was taken to the hospital, suffering a fractured pelvis and contusion to the head. The older woman was settled in the United States many years ago.

According to the Police statement on the suspect’s criminal history.

“Letting this murderer out of prison so that he could spew hate and beat down a defenseless person was a political choice,” Lynch said. “Politicians have deliberately created a system that prioritizes his interests over the safety of New Yorkers. Many of these hateful attacks could be prevented if we had a functioning criminal justice system. Our elected leaders chose to dismantle it.”