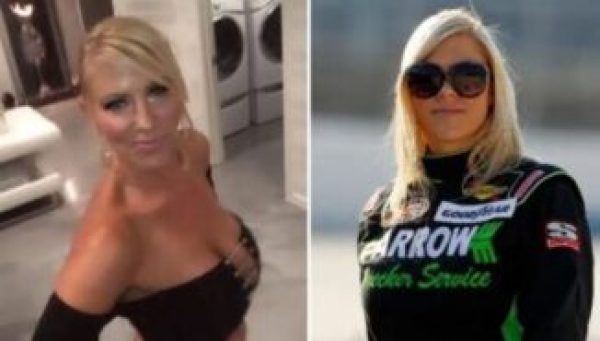 Candace Muzny is a former NASCAR race car driver, who has bonded out of jail after allegedly attacking workers and an officer at a metro nail salon. She was born on June 18, 1981, in Oklahoma City, OK.

Candace Muzny, a former race car driver, was arrested after police say she attacked a nail salon worker in Oklahoma City because she wasn't speaking English during her manicure, and then assaulted a police officer who responded to the incident: https://t.co/e4GGE95Fo7 pic.twitter.com/iiq9wlgCdU

Muzny describing her as a regular competitor in the NASCAR Late Model Divisions and Pro Series across the states. she grew up drag racing with the boys after school or tinkering with cars at her father’s gas station in Oklahoma.

Candace Muzny’s hands say a lot about her racing career. Her designer nails are perfectly manicured and tipped with glitter. But when she rolls them over, they are covered with ugly scabs and bruises.

She was described as part of a trend of beautiful women building NASCAR careers and was said at that time to be racing in the middle of the pack in the NASCAR K&N Pro Series.

Muzny Was the Fiancee of Race Car Driver Del Dalrymple, Who Died Young & Once Described Her as Fast…Very Fast. He died unexpectedly of natural causes, according to his obituary. He was only 46 years old.

Del will always be remembered by landmarks at Ascot and Corona Raceway, Riverside and Irwindale, such as the chain-link fence built to prevent other spotters from getting thrown over for messing with Candace, says the obit, which was first published in the Orange County Register.

Dalrymple praised Muzny in a 2005 article in the Register, saying, Everything she has gotten she has had to work hard for. She didn’t just get everything handed to her far from it. Let me tell you, this girl is fast … very fast.

Candace Muzny is accused of hitting a Vietnamese nail salon worker in the face because the nail tech didn’t speak English during her pedicure.

The Oklahoma City, Oklahoma woman is also accused of assaulting a police officer by slashing his ear with a pocket knife during an out-of-control incident in which her dog also tugged on the officer’s boot, according to a police report.

The Oklahoma City police report, obtained by Heavy.com, says that the incident was labelled “anti-Asian bias.”

The 5-foot 2-inch Muzny is accused of aggravated assault, a felony, among other possible charges. In an interview with Heavy.com, Muzny denied the account given by the nail salon tech, police officer, and a witness, saying it wasn’t true (the police report says the officer had a body cam activated.)

Muzny has a variety of court cases in the criminal and civil court systems in Oklahoma County. She was accused of leaving the scene of an accident with personal injury in 2016, a felony, but the case was dismissed.

She was accused of drunk driving in 2018. Court records say she pleaded guilty but the case was deferred: “The defendant enters a plea of guilty and sentencing is deferred until 6-4-2020…the defendant will be supervised by OK Ops…”