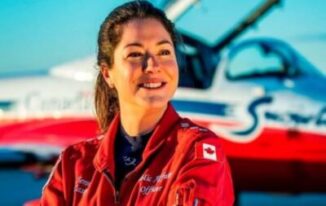 Captain Jennifer Casey is a Canadian aerobatic. She joined the Canadian Armed Forces in August 2014 as an immediate passage official. Before going along with she went through quite a while working in communication radio as a journalist, stay, and maker in both Halifax, NS, and Belleville, ON.

Casey’s first task as a Public Affairs Officer was at 8 Wing Trenton, the Royal Canadian Air Force’s home of air portability. She went through the 2018 season with the CF-18 Demo Team, voyaging North America and the United Kingdom with the NORAD 60 fly. Skipper Casey joined the Canadian Forces Snowbirds in November 2018, as per her biography.

On May 17, Captain Jennifer Casey kicked the bucket after she shot out from the Canadian Forces Snowbirds stream in Kamloops, British Columbia, Canada. The occurrence happened as two Snowbirds were taking off from the air terminal in Kamloops, a city around 200 miles upper east of Vancouver.

A video of the incident shows that shortly after takeoff, one of the jets appeared to veer off and rise steeply before turning into a roll and starting a nosedive toward the ground. At that point, two people were seen ejecting from the jet before it crashed into a house.

The Canadian Forces (CF) Snowbirds have been on a cross-Canada tour to “salute Canadians doing their part to fight the spread of COVID-19,” as a part of Operation Inspiration. The team flies in a nine-jet formation, and Casey was in one of the aircraft, piloted by Captain Richard MacDougall.

The Royal Canadian Air Force (RCAF) shortly after the incident, confirming that one of the CF Snowbirds members had died and the other sustained serious, but not life-threatening injuries. It then confirmed the identity of the deceased member as Captain Jenn Casey: “The RCAF has suffered another tragic loss of a dedicated member of the RCAF team. We are deeply saddened and grieve alongside Jenn’s family and friends. Our thoughts are also with the loved ones of Captain MacDougall. We hope for a swift recovery from his injuries. – Comd RCAF.”

Many have been posting tributes to Casey since the RCAF revealed the identity of the deceased Snowbirds member. Canadian Prime Minister Justin Trudeau posted:

He wrote: “Tonight, I join all Canadians in mourning the loss of a member of the CF Snowbirds Operation Inspiration team, Captain Jennifer Casey. I’m sending my deepest condolences to her loved ones, and wishing Captain Richard MacDougall a full recovery.”

Their post reads: “A Nova Scotian storyteller, she was a journalist before joining as a Public Affairs Officer. Across Canada and the United States, she brought stories and smiles. She was one of us, our sister. Captain Jenn Casey died today. Please say her name. Remember Jenn. -30-”