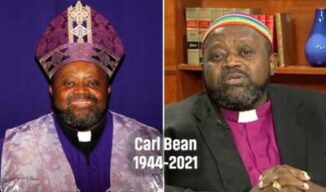 Bean was a Motown and disco singer before founding the denomination’s first church, the Unity Fellowship Church in Los Angeles, in 1975.

He is well known for his version of the early gay liberation song “I Was Born This Way.” He was out and proud about his sexual orientation.

Bean became an AIDS activist in 1982, campaigning for those living with the disease.

🧵More sad news fam…HIV/AIDS activist Archbishop Carl Bean, the founder of Minority AIDS Project and Unity Fellowship Church–often nicknamed the Black gay church for being the country's 1st Black church affirming of the #LGBTQ community has transitioned and is now an ancestor. pic.twitter.com/r5bOBhyPtj

He moved to New York City at the age of 16 to get away from his traumatic home and pursue a gospel singing career, working with gospel bandleader Alex Bradford and others.

He founded the band Carl Bean and Universal Love after another transfer to Los Angeles, which he has called home ever since, and gained the attention of Motown Records.

In 1985, he established the Minority Aids Project, which provides HIV and Aids care and treatment to low-income Black and Latino HIV and Aids patients in Los Angeles.

Bean “made the transition into eternal life” after a long illness, according to a statement from the Unity Fellowship Church Movement, a church for Black LGBTQ+ worshippers founded by Bean.

The church stated, “Archbishop Bean worked tirelessly for the liberation of the underserved and for LGBTQ people of faith and in doing so, helped many around the world find their way back to spirituality and religion”