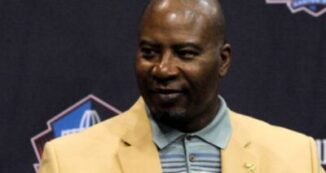 Chris Doleman was former NLF Hall of Fame defensive end. He became one of the NFL’s most feared pass rushers during 15 seasons in the league. Doleman also played for the Atlanta Falcons and San Francisco 49ers.

Chris Doleman was born on 16 October 1961 in Indianapolis, IN and died on 28 Jan 2020 at the age of 58. He attended William Penn Senior High School in York, Pennsylvania, and graduated in 1980. He spent a postgraduate year at Valley Forge Military Academy in 1981.

Doleman played college ball for Pittsburgh before he was selected by Minnesota in the first round of the 1985 NFL draft. He spent his first nine seasons with the Vikings, collecting a league-high 21 sacks in 1989.

Many times Chris had mentioned his parents that supported him and his choice of career. Though the early life of Chris is not available, he was raised by his parents, along with five siblings in York. Chris was proud of his father, John Doleman and his mother, Mary Doleman. Moreover, he was choked up talking about his parents in many past events. Apart from that, no information is available regarding his parents and siblings.

Doleman began his NFL career as an outside linebacker.  Minnesota drafted Doleman fourth overall in the 1985 draft out of Pittsburgh. He played 15 seasons in the NFL, and 10 with the Vikings. The other five seasons he split between the Atlanta Falcons and San Francisco 49ers.

Doleman, who recorded 21 sacks in the 1989 season, the highest total recorded that season and the fourth-highest total ever. The 21 sacks in a single season was a Vikings record until Jared Allen recorded 22 sacks in 2011. Doleman later played for the Atlanta Falcons and the San Francisco 49ers before returning to the Vikings in 1999 for his final season. He was a first-team All-Pro in 1987, 1989 and 1992. He garnered second-team All-Pro selections in 1990 and 1993. In 2012, Doleman was elected to the Pro Football Hall of Fame.

Before his death, Chris’s net worth was estimated at $2 million.

Chris was a family person with a happy married life. He married Toni Doleman, and the couple was blessed with two children. He had a son, Taylor Doleman, and a daughter, Evan Doleman. Nevertheless, Chris kept his personal life under the radar, revealing very little information out in the media.

Later, he married LaTresa Doleman. The duo couldn’t celebrate their marriage anniversary more than once, as they tied the knot in September 2018. His wife, LaTresa, was a former competitor for Miss USA and holds Mss Georgia title.

One of America’s renowned NFL League players Chris lost his life to brain cancer. On January 28, 2020, Chris left the world at the age of 58. He was battling his experience with cancer. On January 25, 2018, he had brain surgery, which was later diagnosed as glioblastoma. The disease took the life of Chris. The details on his funeral are yet to be revealed as his family is mourning the death.

“I had the honour of getting to know him not only as a great football player but an outstanding human being,” Pro Football Hall of Fame president and CEO David Baker said in a statement. “The legacy of Chris Doleman will live forever in Canton, Ohio for generations to learn from how he lived a life of courage and character.”
He was named an eight-time Pro Bowler and two-time first-team All-Pro.