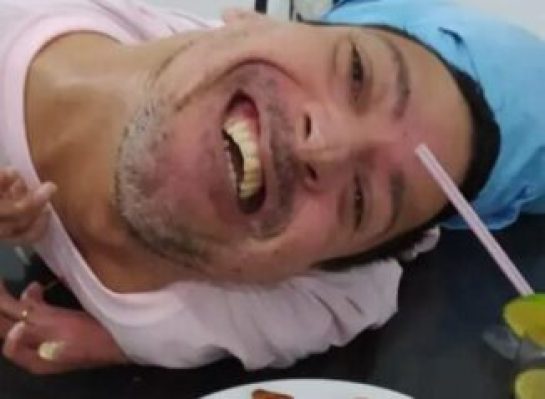 According to Claudio Vieira de Oliveira Biography and Wiki, He is a 44-years-old Brazilian man born with his head ‘upside-down’ and wasn’t expected to live for 24 hours is now 44, with a full career ahead of him. He lives in the north-eastern Brazilian state of Bahia, northeast Brazil. He has muscular atrophy in his legs; his arms are close to his chest, and, in particular, his head is complete upside down, resting on his back.

Oliveira suffers from arthrogryposis multiplex congenital. The condition means he has atrophy of the leg muscles, his arms are stuck to his chest, and his head is turned all the way back.

Although doctors thought he wouldn’t survive the past 24 hours, Claudinho (as he’s known to friends) hopes to become a motivational speaker. His disabilities have so far not stopped him from doing things he enjoys, but because of the pandemic, he’s been forced to shield and so has had to put everything on hold.

Speaking to Brazilian news site G1, he said: “I’ve never had [difficulties], my life is normal. I’m in full-on quarantine because this Covid is very aggressive; it’s lethal, so we’re scared. Spare me, God, from this damned illness.

“I’m being over twice as careful, I’ve been isolating for over a year and I only leave the house to sort out things that only I can do, such as banking.”

Claudinho has always made sure his condition didn’t hold him back. Even from the age of seven, he was determined to live his life to the fullest. He learned to read and write at home with his mother as a child. Although his physical condition can make things more difficult, Claudinho has never had a problem with seeing, breathing, eating, or drinking.

In fact, he’s even made his medical issues work for him. The inspirational man has launched a DVD, written an autobiography, and even been an occasional motivational speaker, doing speeches since 2000. But, with the global pandemic taking its toll, Claudinho has had to put his speeches on hold.