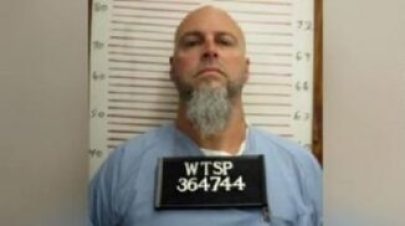 Curtis Ray Watson is a prisoner who escaped from West Tennessee State Penitentiary in Henning and is also a person of interest in the homicide of a Tennessee Department of Corrections employee Debra Johnson who was found killed in her home. Curtis was serving a 15-year sentence for, especially aggravated kidnapping.

Watson stands at a height of 5’11”, weighs 140 pounds with brown eyes and a long grey beard. He also has a variety of tattoos across his body.

NEW PICTURES: Curtis Watson has a variety of tattoos across his body.

Please share to help us spread the word! pic.twitter.com/lFmizB7A8l

On August 7, 2019, Curtis escaped from West Tennessee State Penitentiary in Henning. He was serving a 15-year sentence for aggravated kidnapping. The officials discovered him missing after they put the facility on lockdown and conducted a check of inmates after the body of Debra Johnson, an employee of 38 years who oversaw the facilities in the western part of the state, was discovered in her home on Wednesday morning about 11:30. The officials believe she was a victim of a homicide.

According to News 4, Curtis was a minimum custody offender and had a job as a farm laborer at the prison. He left the prison area on a tractor which was found about a mile from the prison facility.

During a press conference, TDOC Commissioner Tony Parker gave his condolences to Johnson’s family and said the officers will find Curtis and bring him to justice.

“I want to extend my condolences to the family of Miss Johnson, who was a victim of this homicide. Tonight, the TDOC is working closely with the TBI, the Department of Safety and local law enforcement agencies to search and to find Curtis Ray Watson, who is listed as the person of interest in this homicide. Rest assured we will find this offender and bring justice to the family of Debra Johnson.”

Tony Parker also said that Curtis had no disciplinary action against him since 2007, prior to 2007, he was disciplined for not reporting to his assigned duties and classes.

Curtis was added by the Tennessee Bureau of Investigation to its ‘Most Wanted list‘ with a reward of up to $2,500.

The Blue Alert poster reads; “The Tennessee Bureau of Investigation has issued a Statewide Tennessee Blue Alert for Curtis Ray Watson. Watson is listed as a person of interest in the homicide of a Tennessee Department of Correction employee on August 7th, 2019 and is an escapee from the West Tennessee State Penitentiary in Henning, Tennessee. Watson should be considered extremely dangerous. If you have any information concerning Watson, please contact the TBI at 1-800-TBI-FIND.”

BLUE ALERT: We need your help to find Curtis Ray Watson, an escapee of the West Tennessee State Penitentiary in Henning.

Watson is also a person-of-interest in the homicide of a Tennessee Department of Correction employee today.

BLUE ALERT: Here is an additional profile picture of Curtis Ray Watson, the escapee who is the subject of our Blue Alert. Watson should be considered extremely dangerous.

Curtis Ray Watson Was In Prison For Kidnapping

Watson was serving a 15-year sentence on an especially aggravated kidnapping conviction in Henry County in 2013. His sentence was due to expire in 2025. Covington Leader reported that on July 2012 a woman had reported that Watson had hit her over the head and raped her twice.

He had previously been convicted of aggravated child abuse out of Carroll County, the sentence expired in 2011. According to News Channel 5, his record also included tampering with government records and a violation of protection order.