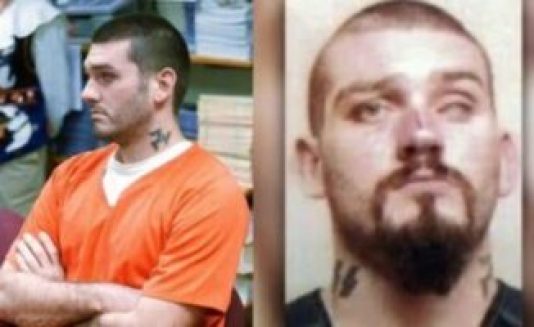 Daniel Lewis Lee is scheduled to die by lethal injection at 4 pm at the Maximum security Terre Haute Federal Prison in Indiana.

Lee was only 23 when he and a man named Chevie Kehoe travelled from Washington to Arkansas with the intent to rob a gun dealer, William Mueller, who Kehoe and his father had stolen the year before, according to FindLaw.

It’s only the fourth time a federal inmate will be put to death since 1988, and the first person to be euthanised by the federal government in seventeen years.

Lee was 17 when he got in a fight at a party with Joseph Wavra. According to court files, Lee beat Wavra up and with the help of someone named John Patton dragged Wavra to a sewer tunnel. Lee robbed Wavra and Patton suggested that they kill him, according to a witness. Lee went to get a knife from the house, and Patton died Wavra.

Lee pleaded guilty to robbery in the case and was sentenced to five years in prison, but the judge suspended the sentence.

In 1995 Lee was convicted of a misdemeanour for carrying a concealed weapon in Florida and was sentenced to six months probation. In 1996, just a month before the ambush on the Mueller’s court documents say that Lee put an improvised explosive device or IED at the Spokane City Hall building in Washington, which exploded, damaging the structure.

Then, while Lee was in jail on Murder charges in 1998, court records say he tried to get another inmate to smuggle in a gun so Lee could use it to escape.

The mother of Nancy Mueller and grandmother of Sarah Powell, Earlene Peterson, along with her surviving daughter and granddaughter filed a petition with the court saying that due to the coronavirus travel it is not safe to travel to the execution, CBS reported. The family asked them to stay the execution until it’s safe to go, but the courts rejected their plea.

Before that, Peterson was already asking for Lee’s death sentence to be vacated. In a statement published in the Arkansas Times, she asked President Trump directed to give him a life sentence instead.

As per mandated by the Federal government, Phenolbarbitol Sodium is the drug that is to be used to end the lives of death row inmates.

The mandate was issued in July of last year, along with other protocols of how to perform executions and who can do it.

According to the mandate:

Qualified personnel includes currently licensed physicians, nurses, EMTs,
Paramedics, Phlebotomists, other medically trained personnel, including thosetrained in the United States Military having at least one year professional experience and other personnel with necessary training and experience in a specific execution-related function. Non-medically licensed or certified qualified personnel shall participate in a minimum of ten (10) execution rehearsals a year and shall have participated in at least two (2) execution rehearsals prior to participating in an actual execution.

Lee is not the only inmate whose death sentence is being upheld after decades.

Tomorrow, Daniel Lewis Lee will be moved to the Execution Facility at USP-Terre Haute. He will be housed in a cell next to the death chamber. pic.twitter.com/juy0JlFOS4