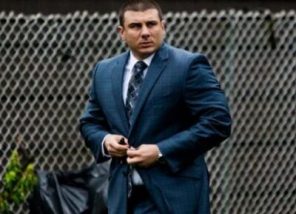 Daniel Pantaleo is a 30 years old NYPD officer. He was famously caught on video with his arm around the neck of Eric Garner, was fired on Monday.

He was charged after the death of a 43-year-old State Island man Eric Garner who he put him in a chokehold.

Who is Eric Garner Bio

Eric Garner was a 43-year-old man who died on July 2014 of a heart attack after NYPD cops put him in a chokehold and knocked him to the ground. Daniel Pantaleo was blamed for the chokehold.

The arresting police claimed that they handcuffed Garner in Tompkinsville at about 5 p.m. because he was selling untaxed cigarettes.

This was however disputed by witnesses who told the New York Post that Garner was not peddling smokes and had tried to break up a fight between two people who ran off before cops arrived.

Eric Garner's mother spoke out in July after officer Daniel Pantaleo escaped federal charges for her son's death. She said all officers involved should be fired.

"5 years ago my son said 'I can't breathe' 11 times. And today, we can't breathe." pic.twitter.com/HFzOBerHO4

Earlier this month, one of Eric Garner’s daughters spoke out to demand Pantaleo’s immediate termination.

Emerald Garner said, per The Washington Post, This has been a long battle, five years too long. And finally, somebody has said that there’s some information that this cop did something wrong.

The Garner family have not yet made a statement on Pantaleo’s termination. This post will be updated to reflect that statement if and when it is released.

During his press conference on Monday, O’Neill said that he didn’t inform Pantaleo of his decision prior to speaking publicly.

What’s more, he said he had no intentions to speak with Pantaleo in person at any point.

“In carrying out the court’s verdict in this case, I take no pleasure. I know that many will disagree with this decision, and that is their right. There are absolutely no victors here today.

Not the Garner family, not the community at large, and certainly not the courageous men and women of the Police Department who put their own lives on the line every single day in service to the people of this great city. Today is a day of reckoning, but can also be a day of reconciliation.”

Pantaleo Is Not Married. He Doesn’t Have a Wife.

Many have been searching for details around Pantaleo’s social and personal life in the past few years, in the wake of Garner’s controversial death. Daniel Pantaleo does not have a wife.