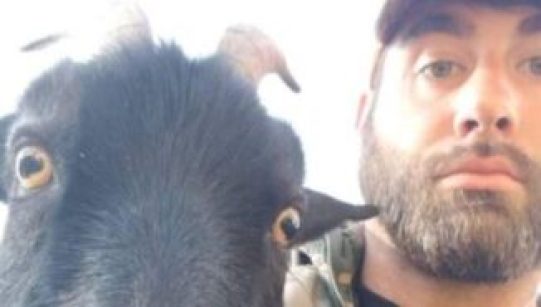 According to Eason, the goat was “farm-raised” and apparently meant to be food for his family–not a pet. Eason posted messages he received from fans to his Instagram story and responded by writing on top of the messages.

“At about one-year-old, the males are big enough to eat and have really good meat. The females are really only good for milk but they have very rich milk,” Eason wrote in response to one fan. “Americans are pansies when it comes to food,” he added in another. When some asked if he got the goat from the store, Eason told the viewer it was “farm-raised at home.”

David Eason tied the knot with his wife “Jenelle Evans” in September 2017. Their marriage ceremony took place privately. He has three children, two daughters named Maryssa Rose and Ensley Jolie and a son named Kaden David. He and Jenelle Evans married in 2017, then separated in 2019. They reconciled in 2020.

David Eason Career
David Eason was working as a pipe welder before making his career in reality shows. He came to limelight after he started dating Jenelle Evans. He has also become a social media star and has garnered nearly half a million followers. He keeps sharing his family pictures on Instagram. He appears alongside his wife on the popular show Teen Mom 2.

Eason and Evans have been working on a YouTube series, titled I Have Something To Say, where they talk about Nugget’s death and the CPS investigation. According to Eason, Nugget was gentle with him but not the children.