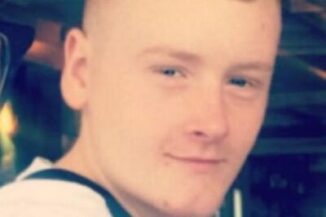 Declan McNally was a Popular boy from Manchester, who died after being ‘egged on’ to jump over a canal, only to hit his head on the other side and fall into the water, an inquest heard.

Bright and caring Declan McNally plunged seven feet after hitting into the side of the Ashton Canal lock in Droylsden, Tameside, in January. A coroner has ruled he was likely dared to make the jump while out with a group of youths, the Manchester Evening News reports.

A witness heard one of the youngsters say ‘you’re not going to do it you p***y’ just before he attempted to leap across the lock. He later died in hospital despite ‘truly heroic’ efforts to save him from the emergency services.

McNally’s family told the hearing the fact he had previously been bullied meant he would have felt he had to do it.

However, the coroner said there was no evidence he was forced or threatened in any way.

Aspiring boxer Declan was with a group of five other youths who met up in Droylsden town centre before deciding to head to the stretch of the canal around Lock 18, behind Wood Square where witnesses said they were listening to music and “messing around” on what was a cold, wet winter evening on Wednesday, January 22 this year.

He was seen by two independent witnesses, two women who live in a house on Fairbottom Walk overlooking the canal, whilst stood in the middle of the lock to turn to run towards one of the gaps and jump.

However the inquest heard after attempting to jump, he did not make it to the other side and hit his head and throat on the stone wall on the opposite side before falling over seven feet down into the water.

The alarm was immediately raised with neighbors rushing to help before a large number of emergency service personnel arrived.