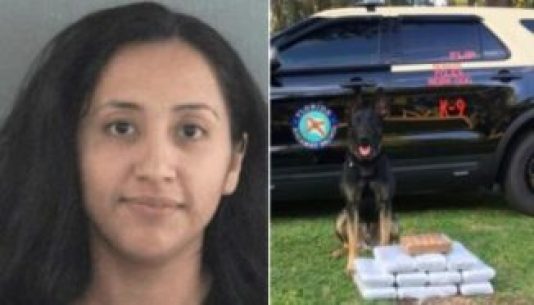 Elizabeth Espinoza is a 27 years old girl from Ruskin, Florida, who arrested after troopers say they discovered more than $1.2 million worth of cocaine in her vehicle. on January 7, She was pulled over on Interstate 75 in Sumter County, Florida.

#Florida Highway Patrol troopers say they found $1.2M worth of cocaine in Elizabeth Espinoza's vehicle during a routine traffic stop, which escalated because she was acting very nervous. Btw, the K9 officer's name is Flip: https://t.co/F8zEfoF6zI@HeavySan pic.twitter.com/F3OGG73fSw

$1.2 Million worth of cocaine Found

Elizabeth arrested after troopers discovered $1.2 million worth of cocaine in her vehicle. on January 7, she was driving southbound on Interstate 75. The windows on her 2016 red Dodge Journey had an illegal tint. The stop happened in Sumter County, which is located west of Orlando.

It began as a routine traffic stop. But troopers said that Espinoza was acting “overly nervous” and this raised the officers’ suspicions. They decided to call in a police dog as a precaution.

Troopers quickly brought a K-9 officer to the scene to investigate the Dodge Journey. The drug-detecting dog, named Flip, honed in on different areas of the vehicle. This gave troopers probable cause to do a more thorough search.

The troopers discovered cocaine “hidden within the dashboard and other voids within the rear of the vehicle,” according to the news release. There were about 12 kilos of the drug (which is more than 26 pounds). That much cocaine has a street value of about $1.2 million.

Elizabeth Espinoza was arrested in 2013 for a domestic violence incident involving the father of her child. Court records from Pinellas County in Florida show that she was charged with Aggravated Battery with a Deadly Weapon after the victim accused her of trying to run him over with his own vehicle.

Elizabeth Espinoza has faced several charges related to traffic violations over the past several years. Records in Pinellas County show that she was cited twice in 2014 for driving with either an expired license or without proof of registration. She paid fines in both cases.

Elizabeth Espinoza was booked into the Sumter County Jail that afternoon. According to inmate records, the bond was set at $158,000. The listed charges include: