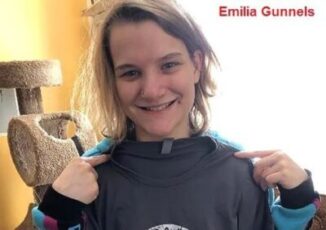 Emilia Gunnels was a 21-year-old woman, who went missing from a residence on Tee Taw Circle Sunday found dead. A statement from the Grayson County Sheriff’s Office said that on Monday at approximately 2:27 p.m., city of Sherman, workers observed what appeared to be a white female’s body underneath a bridge on Blue Flame Road in Sherman.

Emilia was born and raised in Illinois, Irene Gunnels said. The family moved to Grayson County when Emilia’s father got a job at Champion Cooler.

Gunnels’mother, Irene Gunnels, said her daughter had only recently turned 21 and was attending Grayson College.
She said her daughter was getting her basics at Grayson because she was still trying to figure out what she wanted to do with her life.

“She was eccentric and she didn’t really care about what people thought about her,” the mother said.

“She was generous and very strong-willed and determined to do what she had her mindset to do,” she continued.

“She loved animals, especially her guinea pigs. I have two to take care of now,” Irene Gunnels said.

Death Cause and Investigation

Authorities in Texas have found the remains of a slain 21-year-old woman under a bridge a day after she vanished from a home in Sherman. Sherman city workers found her body under a bridge on Blue Flame Road near Midway Mall around 2:30 Monday afternoon.

Gunnels, a resident of Sherman, was reported missing on Sunday. Police are handling her death as a homicide.

A statement from the Grayson County Sheriff’s Office said Gunnels’ body was found shortly before 2:30 p.m., underneath a bridge in Sherman

The body “was close in age and had similar features” as Gunnels, who was declared dead at the scene. Medical examiners later confirmed what police already knew.

The cause of her death has not been disclosed.

On Tuesday, he announced the sheriff’s office and Texas Rangers are investigating her death as a homicide. Investigators are not releasing her cause of death at this time.

“We ask that anybody out there in the public that has information on this case to please contact Lt. Heath Wester at 903-813-4200, extension 2216,” Smitherman said Tuesday.