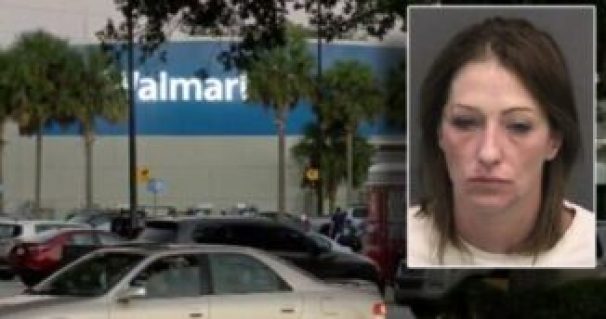 Emily Stallard is 37 years old women from Florida, who arrested after allegedly making a bomb inside of a Walmart. She used a mason jar with fuel denatured alcohol and wire brad nails inside. She then used a shoelace as a wick and attempted to light the shoelace with a lighter before the off-duty officer and security guard stopped her. They then detained Stallard until deputies arrived. Emily multiple felony charges, including firebombing, attempted arson and child abuse.

Emily is accused of trying to cause an explosion inside the Walmart store. She was arrested Saturday after deputies say she tried to build an explosive device inside a Walmart while she had a child with her.

The incident took place just before 6 p.m. at the Walmart at 2701 E Fletcher Ave. A security guard noticed Stallard roaming the aisles of the store and opening unpaid items such as flammable materials, projectiles and matches, according to the Hillsborough County Sheriff’s Office.

Emily faces charges of attempted arson of a structure, firebombing, contributing to the delinquency of a minor, child abuse and battery on a law enforcement officer.