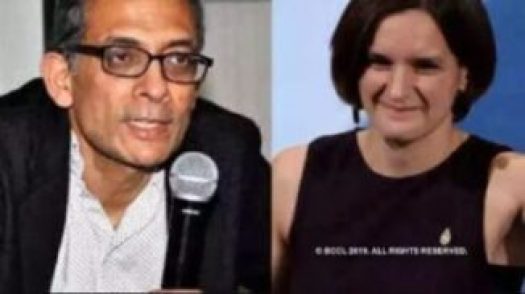 "Showing that it is possible for a woman to succeed and be recognised for success I hope is going to inspire many, many other women to continue working and many other men to give them the respect they deserve."

She was born on 25 October 1972 in Paris, France. Duflo is a French-American economist. She is the Abdul Latif Jameel Professor of Poverty Alleviation and Development Economics at the Massachusetts Institute of Technology.

She is the co-founder and co-director of the Abdul Latif Jameel Poverty Action Lab.

She grew up in France and earned degrees in economics and history from the Ecole Normale Supérieure in Paris in 1994. She obtained a Masters in Economics degree the following year.

Duflo then moved to the United States to attend MIT. She earned her PhD in Economics in 1999.

Duflo stayed on at MIT as an Assistant Professor of Economics and has been with MIT for her entire professional career.

In addition to teaching, Duflo is also the co-director of the Abdul Latif Jameel Poverty Action Lab.

Duflo married to his husband Abhijit Banerjee in 2015, who is an MIT professor. They have a child, born in 2012.

His husband Abhijit Banerjee was a joint supervisor of Duflo’s Ph.D. in economics at MIT in 1999.

Esther Duflo and her husband, Abhijit Banerjee, have collaborated multiple times in the course of their research.

MIT’s Abhijit Banerjee and Esther Duflo have won the @NobelPrize in #economics, “for their experimental approach to alleviating global poverty.” Congratulations! They share the prize with Michael Kremer of Harvard. pic.twitter.com/cYx4ePMrTN

In 2011, they published Poor Economics: A Radical Rethinking of the Way to Fight Global Poverty. The book has been translated into 17 languages and won the Financial Times and Goldman Sachs Business Book of the Year Award.

Esther Duflo was awarded the Nobel Prize in Economics in 2019 along with her two co-researchers Abhijit Banerjee and Michael Kremer for their experimental approach to alleviating global poverty. Duflo is the youngest person and the second woman to win this award.

2019 Economic Sciences Laureate Esther Duflo, born in 1972, is the second woman and the youngest person to be awarded the Prize in Economic Sciences.#NobelFacts #NobelPrize pic.twitter.com/0Ek8E7kLRh

In 2014, she won the Infosys Prize in Social Science-Economics for leading “a major shift in development economics”.

In November 2013, she was honored as an Officer of the French Order of Merit.

She is a recipient of the 2010 John Bates Clark Medal for economists under 40 made the most significant contribution to economic thought and knowledge.

She received her (first) honorary doctorate from the Université Catholique de Louvain, on 2 February 2010.

In 2009 she was named a MacArthur Foundation Fellow, otherwise known as a “genius” grant. She is also a fellow of the American Academy of Arts and Sciences from 2009.

On 21 May 2009, she was selected as the first recipient of the Calvó-Armengol International Prize, which she finally received on 4 June 2010.

That is awarded every two years to a top young researcher in economics or the social sciences for contributions to the theory and comprehension of the mechanisms of social interaction.

The US magazine Foreign Policy named her as one of the top 100 public intellectuals in the world in May 2008.

In 2010, Foreign Policy again named her to its list of top 100 global thinkers. The Economist lists Duflo as one of the top 8 young economists in the world.

She was named one of Time Magazine’s 100 most influential people in the world in April 2011.

She was awarded the Elaine Bennett Research Prize by the American Economic Association in 2002, which honours a female economist under 40 who has made outstanding contributions in any field of economic research.

In 2012, Duflo was picked by Foreign Policy magazine as one of its Top 100 Global Thinkers.

She received the 2015 Princess of Asturias Social Sciences award in Spain.