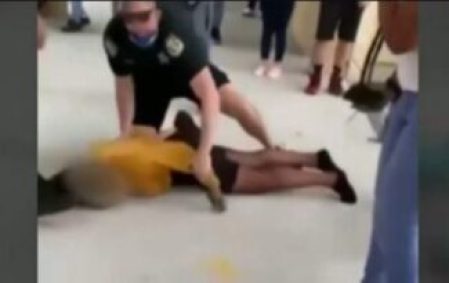 According to Ethan Fournier Bio, Wiki and Biography, He is a Florida school resource officer, who is on paid administrative leave after a video surfaced of him taking a high school student to the ground.

The incident with a school resource officer took place Tuesday at Liberty High School in Kissimmee, Florida, according to the Osceola School District.

In the video, you see the teenager hit the concrete hard, and her body goes limp. The officer proceeds to place handcuffs on her as the crowd around screams. Multiple people appeared to be recording and caught the action from different angles. It looked like the student lost consciousness.

The only thing we’ve heard from OCSO thus far is that the officer was breaking up a fight and that an investigation is underway.

Presumably, Sheriff Marcos Lopez — who’ll be at the podium shortly — will have some sort of update on what they’ve learned at this point, and whether the officer will face any repercussions. It’ll be interesting to hear if he denounces the act, or tries to justify it.

Several people have accused the officer of excessive force, with some supposed eyewitnesses claiming the girl was already under control and separated when the cop did what he did. Unclear how the student is doing, or what her condition is.

The sheriff said Fournier has been placed on paid administrative leave, pending the outcome of the investigation.

FDLE confirmed is investigating the use of force at Liberty High School.
“Each case is unique including this case.

In this case and all others, our role is to determine the facts of what happened and a state attorney or prosecutor determines if there are law violations,” a statement from the Department said.

The deputy, whom Sheriff Lopez identified as Ethan Fournier, has been with the Sheriff’s Office for ten years and doesn’t have a history of misconduct, other than minor damage to property.

“The district is fully cooperating with the Osceola County Sheriff’s Office’s active investigation into the situation,” Schafer, the public information officer, said in a statement.