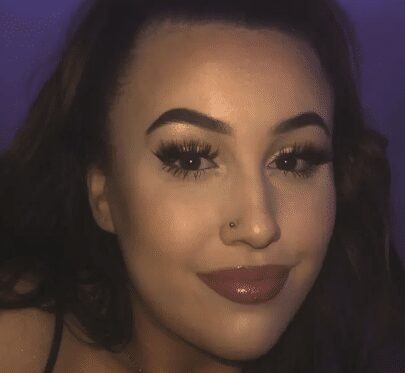 Eve Aston, from Wolverhampton, was discovered lifeless by her father in her family home in Finchfield and paramedics were unable to save her.

Eve Aston has died at the age of 20-years-old.

A heartbroken mother has paid tribute to her 20-year-old daughter who was found dead in her bedroom, four years after she survived the Manchester Arena terrorist attack.

Her mother Amanda Aston, 55, has described her as ‘one of a kind’ and revealed that Eve attended Ariana Grande’s concert at the Manchester Arena on May 22, 2017, when terrorist Salman Abedi killed 22 people in a suicide attack.

Amanda said the Manchester attack ‘took its toll on Eve, who had been safely rushed out of the concert by her father Andrew Aston, 43.

Eve had struggled with loud noises and suffered from PTSD after the terror attack, Amanda said, adding that the cause of death is not yet known.

The grieving mother told The Birmingham Mail: ‘From the moment she was born she was a jolly soul, she had a very funny sense of humor and was a daddy’s girl.

‘She always had friends around her and was having sleepovers. She had lots of friends who she was always there for.

‘She had really good banter with her brothers and sisters.’

In 2017, suicide bomber Salman Abedi, 22, carried out the horrific terrorist attack at the Manchester arena which killed 22 concertgoers.

On the night of the attack, Abedi, of Libyan descent, walked across the City Room foyer towards an exit door and detonated his shrapnel-laden device, packed into his bulging rucksack, at 10.31 pm just as thousands, including many children, left the concert.

His brother Hashem Abedi, who helped his brother carry out the attack, is serving 55 years in prison.

The Abedi brothers, from Fallowfield in south Manchester, spent months ordering, stockpiling, and transporting the deadly materials for the terror attack, using multiple mobile phones, addresses, and runaround vehicles to make their bomb.

They joined their parents in Libya the month before the blast, but Salman returned to the UK on May 18.

He bought the final components needed for the bomb, rented a flat in the city center in which to build it, and carried out reconnaissance on the Arena before finally executing the plot as fans departed from an Ariana Grande concert.

Amanda, who has set up a GoFundMe page to raise money for the funeral costs, added: ‘She went to the Ariana Grande concert with her father and was made up to be there, Ariana was her idol. She could sing every note.

‘They were on the other side, not where the bomb went off. Since then she has been back to Manchester and has loved putting flowers down for people.’

Amanda said that Eve had suffered from PTSD and in the weeks before her death, she seemed to be ‘getting back to her old self’ after losing a lot of weight.

She said: ‘After the concert, she started suffering from PTSD. She loved cars and was looking at getting a job working with cars but her depression got worse. ‘She couldn’t sleep or hear bangs after the concert. She grieved for the 22. ‘The last couple of weeks she seemed to be getting back to her old self, she had lost a lot of weight. ‘Her dad found her in her bedroom, we’re still waiting to find out what happened.

‘We’re heartbroken, it’s like a bad dream. It’s like she’s going to walk back through the door and say ‘got ya!’. ‘She’s left such a big hole, everyone’s saying they can’t believe it.’ She added: ‘She was such a beautiful person and she should be here. ‘We want to give her a good send-off, you shouldn’t have to bury your daughter. I wouldn’t wish this on my worst enemy.’

Found Dead in Her Bed Room

A heartbroken mother has paid tribute to her 20-year-old daughter who was found dead in her bedroom, four years after she survived the Manchester Arena terrorist attack.

Eve Aston, from Wolverhampton, was discovered lifeless by her father on July 23 in her family home in Finchfield and paramedics were unable to save her.

Amanda, paying tribute to Eve in a statement, said: ‘Eve was one of a kind. Loud, funny, beautiful, and caring does not even cover a tiny percentage of the person she was.

‘Everywhere she was there was light in the room, she was that light, she would make her presence known with such a warm welcoming feeling.

‘Everyone that she knew would always be put before herself, she was such a selfless person everyone’s feelings came before her own.’

She added: ‘[On] May 22nd, 2017 Eve attended Ariana Grande’s concert in Manchester, Ariana Grande was her absolute idol, although everyone who knew her would know this.

‘Sadly the Manchester attack took its toll as eve was present, however, the strength of Ariana Grande’s music got her through alongside her Dad who was with her at the time and guided her out.

‘This was an event so close to Eve’s heart, which, anyone would know as she spoke of Ariana Grande so highly to everyone she came across.’

Amanda then revealed that on Friday 23 July, paramedics were called as Eve was found lifeless in her room.

She said: ‘The family is absolutely broken alongside her boyfriend Brad who meant the absolute world to her.

‘To everyone, this was such a shock, heartbreak, and a newfound pain to those who loved and knew her.

‘This gofundme is for her heartbroken family who did not expect to arrange their daughter’s funeral as she was only 20 years old. She had such a positive impact on each and everyone that met her, being a big statement in many people’s lives.’

MailOnline has contacted the West Midlands Ambulance Service for comment.

Last month, the British Transport Police (BTP) accepted there were ‘serious failings’ in its response to the terrorist attack.

The force failed to share vital information with other emergency services in the immediate aftermath of the explosion at the concert, an inquiry heard.

Assistant Chief Constable Sean O’Callaghan said a declaration of a major incident was not passed on to other services and neither was an officer’s communication, known as a METHANE message, which provides details of the scene.