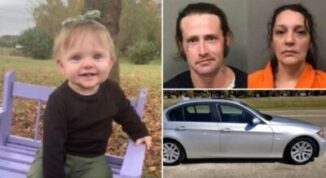 Evelyn Mae Boswell is a 15-month-old Baby Girl, who was reported missing a little more than two weeks ago. She Was Born on November 21, 2018, to Megan Boswell & Ethan Perry.

Boswell was born to Megan Boswell (Mother) and Ethan Perry (Father). Ethan Perry is Evelyn’s biological father. Born in 1999, Perry is an active member of the U.S. Army who joined up in November 2017 after graduating from high school. He is stationed in Louisiana. After news of Evelyn’s disappearance broke, he posted on Facebook saying he’s working with the authorities.

Evelyn Boswell was officially declared missing on February 18, 2020, although she was last seen on December 26 or 11, according to different reports.

Evelyn is in the Tennessee database of missing children with the comment Evelyn was entered as a missing child on Tuesday, February 18, 2020, but was reportedly last seen on December 26, 2019. The entry describes the child as a 15-month old, white female, 2 ft tall, 28 lbs., with blonde hair and blue eyes. Evelyn was last seen wearing a pink tracksuit, pink shoes, and a pink bow.

On February 21, the TBI announced that they were looking for a grey BMW because they believed the occupants had information about Evelyn’s disappearance.

UPDATE: The search for Evelyn Boswell continues. We have another photo to pass along.

Investigators continue to follow-up on leads as they come in.

Please continue to share and help us get the word out.

On February 22, the two individuals driving this BMW were arrested in Wilkes County, North Carolina for driving a stolen car. William McCloud, aged 33, and Angela Boswell, aged 42 and Evelyn’s grandmother, were both arrested on fugitive warrants and were interrogated by Tennessee investigators about Evelyn’s disappearance. Both have been extradited back to Tennessee. William McCloud is Angela Boswell’s boyfriend.

Megan Boswell was arrested and charged with one count of False Reports. She is being held in jail on a $25,000 bond. They said that during the course of the investigation, Megan ‘Maggie’ Boswell [date of birth March 21, 2001] provided detectives and agents with a number of conflicting statements. Further investigation revealed that some of the information provided by Megan Boswell was false.

The TBI shared some home videos of Evelyn on their Twitter in the hope that they would help people come forward with information.

UPDATE: We have a new photo of Evelyn Boswell to pass along.

Agents and detectives continue to work around the clock in an effort to find her.

The number of tips received in connection to the search for Evelyn stands at 375. #TNAMBERAlert pic.twitter.com/VfQo6pSzWX

At a press conference Friday night, the Tennessee Bureau of Investigation and Sullivan County Sheriff’s Office said they believe they found the remains of the girl earlier that evening.

An Amber Alert was issued more than two weeks ago, but authorities have said she hadn’t been seen since at least December.

“This is certainly not the update we had hoped to provide this evening,” TBI spokeswoman Leslie Earhart said.

The remains are being sent for autopsy and positive identification, Sheriff Jeff Cassidy said. He said authorities acting on a tip found the remains on a property in Blountville that is owned by a relative of Evelyn’s mother.