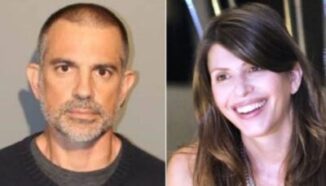 Fotis Dulos, the man accused of killing his wife, Jennifer Dulos, was found with serious injuries in his Farmington, Connecticut, home on the day he was due in court. Local media, citing state police sources, initially said that Dulos had died.

Local television pictures show numerous emergency services personnel and police at Dulos’ home at 4 Jefferson Crossing in Farmington. On January 28, Dulos had been due in court in Stamford, Connecticut, for a bond hearing. Dulos was 52 years old.

Fotis Dulos defense attorney Kevin Smith would not confirm Dulos’ death by suicide. Smith was here at Stamford court for what was supposed to be an emergency bond hearing. There was a good chance Dulos would’ve had his bond revoked and be sent back to jail. @News12CT pic.twitter.com/KN9p4mAyQb

WFSB television pictures showed three police officers standing around a tent outside of the home. The New York Times reports that Dulos attempted to poison himself through Carbon Monoxide.

Dulos’ attorney, Norm Pattis, told the Hartford Courant, “This is a shocking and truly sad day. My heart goes out to his children and his family. It’s just a horrible day.” Pattis later told NBC New York that Dulos had a pulse when he was rushed to a local hospital. The lawyer said, “I am told Mr. Dulos is en route to the hospital with a pulse. Our thoughts and prayers are with him.”

News12 reports that Pattis is in Washington D.C. on a separate case and the January 28 hearing in Stamford was due to be handled by attorney Kevin Smith.

Dulos was out of prison on house arrest after posting a $6 million bond. Dulos had been accused of tampering with evidence in the May 2019 disappearance of his wife, Jennifer Farber Dulos. Officials have arrested Michelle Troconis, 44, Dulos’ former girlfriend, and friend, Kent Mawhinney, 54, in relation to the case. Troconis is also charged with tampering with evidence in the case. Troconis and Mawhinney are due in court on February 20.

Dulos was formally charged with murder and kidnapping in the case on January 7. Prosecutors alleged that Dulos was lying in wait for his estranged wife at her New Canaan home on the morning of May 24, 2019.

The Connecticut Post had earlier reported that Dulos could have had his bond revoked during his January 28 hearing. Dulos was believed to have violated the terms of his release