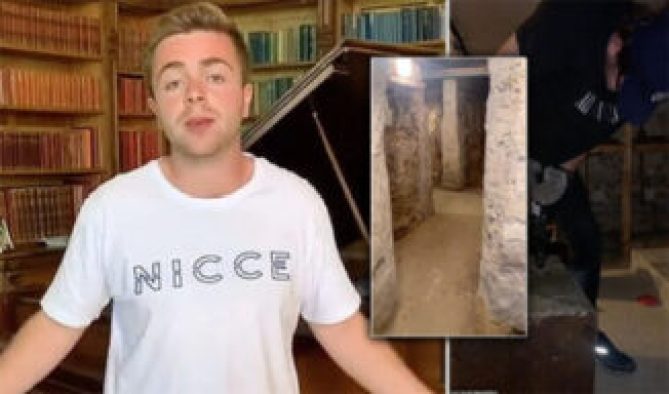 Freddy Goodall is a 23 years old property developer from Sussex, England, was going through old photographs of his family’s 500-year-old estate, he saw something unusual. In the 16th century home’s library, Freddy Goodall noticed a doorway. He started excavating when he discovered he couldn’t see the same doorway in the room anymore.

Facts You Need To Know About Freddy Goodall

Goodall said to The Jam Press, “I searched for it but couldn’t see anything at first, then realized it was hidden behind a bookshelf,”

“Eventually behind one of the books, I found a hole that looked into the hidden room.”

Goodall’s story went viral after he shared a TikTok video of the finding, which has 4.5 million views.

Goodall is seen in the video cleaning the books off the shelf, removing the screws from the wooden panel, and then lifting the panel away, surprised to see a dark, empty space beyond the mantel. As a result, Goodall notices another panel on the floor, which he raises to reveal a secret entrance that leads to underground rooms. Goodall finds a ladder in one of the underground passageways and climbs it, only to be greeted by a larger room above, which is covered in cobwebs, dust, and a wasp’s nest.

When the room takes him to another path, which goes to a basement, two more secret rooms, another corridor with stairs, and several additional passageways, Goodall knows he’s in a rabbit hole.

According to Goodall, the passageways were likely used by servants for convenient access around the house, which went unobserved by the landlord. A brick wall with enigmatic names and dates carved in chalk, as well as an antique safe that appeared to have been neglected for decades, were also uncovered during his journey.

He was able to open the safe and discover books dating back to 1848 that contained information on the property as well as letters.

He said, “I was excited to find something new in a house I have lived in for so long!”

“It was pitch black — so very creepy at first.” Jam Press reported. He added, “I believe they were servant passages that ran under the house and used this to get back and forth from their quarters without being noticed,”

“Some of the underground rooms have been built over the top as one has flagstones which we believe is where they kept the horses.”

“I left the rooms as they were, I like that they have been the same for hundreds of years, there is so much history to be found in each room.”

Users expressed their desire to go on this journey with Goodall in a series of TikTok videos.