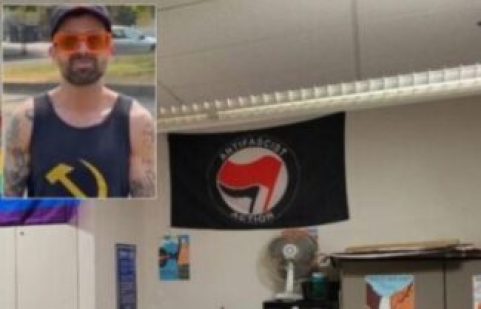 Gabriel Gipe is a Sacramento, California, high school teacher recorded in an undercover sting by the conservative activist group Project Veritas saying he tries to turn his students into “revolutionaries” and has an Antifa flag hanging in his classroom. You can watch the video later in this article.

Gabriel Gipe age is unknown yet.

Evans wrote that the teacher was placed on paid leave “because of his actions and choices in the classroom,” Evans wrote. In his statement, Evans noted that Natomas Unified “will be taking the legally required next steps to place the teacher on unpaid leave and fire the teacher.”

According to Rocket Reach, Gipe previously worked as a hotel assistant for Starbucks and a solar company, which says he has a degree in history from San Francisco State University. His LinkedIn page is deleted, as is his Twitter page.

People are showing up to tonight’s board meeting to voice their concerns.@kcranewshttps://t.co/Iz5l5XkHoj pic.twitter.com/jX4pX6D7xL

In this video, a teacher at Inderkum High School was recorded sharing his educational approach that is disturbing and undermines the public’s trust.”

The video shows Gipe, an AP government teacher at Inderkum High School, speaking with a person identified as a journalist.

“I have 180 days to turn them (students) into revolutionaries,” Gipe says. Asked how, he responds, “Scare the f*** out of them.”

He said that Sacramento’s Antifa effort is loosely organized, but “when there are right-wing rallies and stuff, we’ll create an opposite to that.” He said there’s no official membership list.

“Some students have shared that the teacher has stated he believes students will move to the left as a result of his class,” Chris Evans, the superintendent of the Natomas Unified School District, wrote in a lengthy report. “That is unacceptable. Students are the ones caught in the middle of this. To those who have felt uncomfortable at any time in the past 3 years, we apologize.”

Gipe admitted, “I have an Antifa flag on his wall. A student claimed it made him feel uncomfortable.” He also admitted that he has a Mao sign in his classroom.

In the video, Gipe says he and his wife “have been political organizers,” and he’s been “organizing since I was 13” for a “ton of different organizations.” He said he’s been “on the front lines,” but took a step back.

Gipe was asked to comment about the sting video by Project Veritas while walking his dog. He accused the person of harassing him for asking for his response. Initially told the Project Veritas employee to leave the school or they would call the police when he went there to show the district the undercover video.

He said the teacher had purchased rubber stamps with his own money that included “an inappropriate image of Josef Stalin with an insensitive phrase, as well as other stamps with Fidel Castro, Kim Jung Un and others.”

These were purchased before the pandemic, and their use “was likely initially limited due to Distance Learning,” but the teacher was using the stamps “to mark student work as complete” during at least the 13 days of this school year, Evans alleged.

The teacher encouraged students “to attend civic related activities for extra credit,” Evans wrote. Some of the calendars/events the teacher shared “involved potential protests and other activities that, at times, became unsafe,” Evans wrote.

The district noted that several students and former students had expressed support for Gipe on social media.

Other students “have shared discomfort about his shared politics,” Evans wrote. Concerned parents showed up at a recent school board meeting.

Gipe said students had to take an ideology quiz, and he put their pictures on the wall in a political spectrum. “Every year, they (students) get further and further left,” he said.

When pressed on making students revolutionaries, he advocated an approach to “utilize their propaganda,” referring to TikTok and Instagram.