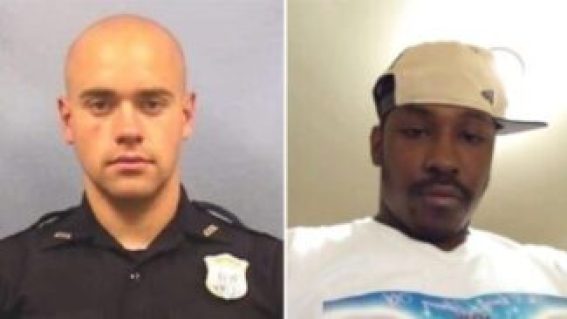 Garrett Rolfe, the Atlanta police officer who shot and killed Rayshard Brooks, has been fired as the city erupts in protests and riots in the wake of Brooks’ death outside a Wendy’s restaurant. That news came from Atlanta police via multiple local news sources.

#BREAKING: Police have identified the officer who was fired after shooting and killing Rayshard Brooks as Officer Garrett Rolfe: https://t.co/i7PUoWh8gx pic.twitter.com/5V0b9yt7ui

Body cam video from the scene has been released.

Videos show Atlanta protesters upset about the police shooting of Rayshard Brooks in a Wendy’s restaurant parking lot breaking windows at the Wendy’s and then starting it on fire.

That action came after a tense day in which the police chief resigned, the mayor called for the officer who shot Brooks to be fired, and the family’s attorneys labeled the death murder. The District Attorney is investigating.

Authorities say that, after struggling with officers and taking an officer’s taser, Brooks pointed it at an officer before the second officer fired and killed him.

The attorneys representing the family of Rayshard Brooks said in a press conference that a taser is not a deadly weapon and called the Atlanta man’s death in a Wendy’s restaurant parking lot a situation of being “murdered on camera.”

The attorneys spoke in front of a large photo of Brooks, who was shot during a confrontation with Atlanta police officers at a Wendy’s restaurant. The shooting has provoked protests throughout the city, and the police chief has stepped down in the wake of it.

“He (Brooks) wasn’t close enough to harm you with it. You could have run him down but instead he got bullets in the back. A man that earlier that day was celebrating his daughter’s 8th birthday at the arcade. Who has three little girls who are 8, 2, and 1, and a stepson, 13. Who we sat with today and watched them play and laugh and be oblivious to the fact their dad was murdered on camera. A scene that we keep repeating, as we watch Gianna Floyd play in Houston, oblivious that her dad was knelt on and murdered. How many more examples will we need? The cameras isn’t doing it, you all filming it isn’t doing it, covering it isn’t doing it, people protesting isn’t doing it, what is it going to take? How many more examples are we going to get? I actually thought we were going to get over all of this. I thought this was going to finally going to start ending with all these changes.”

The shooting took place around 10:30 p.m. June 12. The Georgia Bureau of Investigation wrote that it has “obtained additional surveillance video from the Wendy’s restaurant. Agents have also reviewed video posted on social media. These new videos indicate that during a physical struggle with officers, Brooks obtained one of the officer’s Tasers and began to flee from the scene.

Officers pursued Brooks on foot and during the chase, Brooks turned and pointed the Taser at the officer. The officer fired his weapon, striking Brooks…An earlier account of this incident was based on the officer’s body cam which was knocked off during the physical struggle, preventing the capture of the entire shooting incident.”

Stephanie Walsh, an ABC producer, wrote, “Officer Garrett Rolfe has been terminated by Atlanta PD in the Officer-involved shooting of #RayshardBrooks. He had been on the job since 2013, according to Atlanta PD.” The Atlanta department previously noted on Facebook that Rolfe was part of the Atlanta Police Department’s High Intensity Traffic Team Unit, mentioning that unit “for their recognition during the 15th Annual Mothers Against Drunk Driving Golden Shield Honors.”