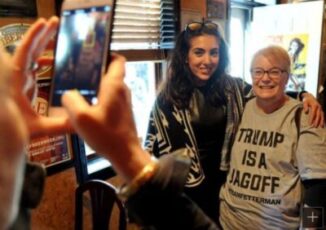 Gisele Fetterman is the wife of an American politician John Fetterman. She is a Brazilian-American activist, philanthropist, and non-profit executive. She was born in Brazil and immigrated to America when she was 8. She became an American citizen in 2009.

She is a co-founder of 412 Food Rescue, a non-profit organization focused on eliminating food insecurity in the United States. As the wife of Lieutenant-Governor John Fetterman, Fetterman is the current Second Lady of Pennsylvania. A formerly undocumented immigrant, she is an outspoken supporter of immigration reform in the United States.

Gisele is outspoken about her experiences being formerly undocumented. The episode Sunday occurred in Braddock, the Western Pennsylvania town where she lives and where John Fetterman was formerly the mayor.

Gisele Barreto Fetterman was born in Rio de Janeiro, Brazil. When she was seven years old, Fetterman came to the United States as an undocumented immigrant with her mother and younger brother, taking up residence in a one-room apartment in New York City. They fled Brazil due to violent crime in their community.

In New York, the family lived in poverty and furnished their apartment with furniture they found on the street. Fetterman said that her family often depended on food banks and thrift stores. Her mother, who had a Doctor of Philosophy degree from a Brazilian university and had worked as a nutritionist and educator, took jobs cleaning hotels and houses and was denied pay often due to her status as an undocumented immigrant.

Trending in News: Who is Emmalyn Nguyen? Wiki, Biography, Age, Family, Cause of Death

Fetterman did not speak English when she arrived in the United States and enrolled in English as a second language program at her school in Queens. The family later moved to Newark, New Jersey. She studied at the Institute for Integrative Nutrition.

Fetterman received her green card in 2004 and became a citizen of the United States in 2009.

In 2007, Fetterman met John Fetterman, then the mayor of Braddock, Pennsylvania, after writing him a letter inquiring about the town’s role in the steel industry. They were married the following year. The Fetterman’s have three children and live in a renovated loft in a former car dealership building, built-in 1920, in Braddock.

Fetterman was the subject of an online controversy in February 2020 after her husband posted a picture to social media showing her in a Rio Carnival costume. In August 2020, she spoke publicly about her use of medical marijuana to treat chronic back pain.

On October 11, 2020, Fetterman was verbally assaulted by a white woman at a grocery store, who used racial slurs and told Fetterman that she “did not belong here [in America].” She filmed the incident and posted the video on social media stating, “This behavior and this hatred is taught. If you know her, if she is your neighbor or relative, please, please teach her love instead.”

Fetterman lives in a converted car dealership with his wife, Gisele Barreto Fetterman, and their three children Karl, Grace, and August.

The second lady of Pennsylvania was called the N-word in a grocery store parking lot over the weekend and posted a video of part of the attack on Twitter, saying it’s a reflection of how the nation is “so deeply divided.”

Barreto Fetterman, 38, said she went to the grocery store Sunday without her security detail — a quick trip to pick up kiwis while they were still on sale — when a woman recognized her and began yelling racist insults, including, she said: “There’s that N-word that Fetterman married” and “you don’t belong here.” Barreto Fetterman said she was stunned and froze. The woman returned to shopping, Barreto Fetterman paid for her fruit and went to her car.

That’s when, she said, the woman exited the grocery store and came toward Barreto Fetterman, who was sitting in her vehicle and had pulled out her phone to record. She said she captured the last few seconds of the interaction and posted the video on Twitter. It shows a woman leaning toward the vehicle, pulling down her purple mask, and saying: “you’re a n—.”

*TRIGGER WARNING* I love love love this country but we are so deeply divided. I ran to the local grocery store and was met by and verbally assaulted by this woman who repeatedly told me I do not belong here. The confrontation continued into the parking lot where I was able to pic.twitter.com/kzSoxCVJ2x