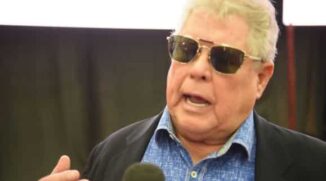 According to Gordon Butch Stewart wiki, Bio and Biograph, He was the founder of the famed Sandals resort chain in the Caribbean. Butch Stewart was a Jamaican hotelier and businessman.He has died on January 4, according to a press release from Sandals Resorts International. More details come from Breaking Travel News, which says the hotelier died at age 79 in the United States after a “short illness.”

He was born on 6 July 1941 in Kingston, Jamaica. He grew up along the country’s north coast, where he came to be known as “Butch,” a nickname given to him by an American sailor. As a child, Stewart helped out at his mother’s appliance dealership, and at 12, he bought a small canoe he used to catch fish and sell them to the local hotels. He then purchased a larger boat, which he operated until age 17. He has died at the age of 79-years-old.

Stewart’s company called him an “unstoppable force, who delighted in defying the odds by exceeding expectations. Stewart single-handedly built the world’s most awarded vacation brand from one resort in Jamaica to over two dozen distinct resorts and villas throughout the Caribbean.

At age 12, he started selling fish he caught to local hotels, developing a taste for entrepreneurship.
He was educated abroad. He then embarked on a career as a “master salesman at the renowned Dutch-owned Curaçao Trading Company, quickly rising to sales manager position but itching to start his own company.”

In 1968, with no collateral “but recognizing the comfort that would make air conditioning an essential service, Stewart convinced American manufacturer Fedders Corporation to allow him to represent their brand in Jamaica.
With that, Stewart’s foundational business – Appliance Traders Limited (ATL), was born, and he was on his way.”

We are deeply saddened to hear of the passing of our friend and stalwart supporter, Gordon ‘Butch’ Stewart. We will miss him beyond measure, and send our deepest condolences to his family and friends during this difficult time. May his soul rest in eternal peace. pic.twitter.com/3fZptDB52e

Stewart had eight children; one of his sons, Jonathan, was killed in a car crash in 1990. His son Brian Jardim sat on the board of The Jamaica Observer and was the owner of Rainforest Seafoods. His daughter Jamie Stewart-McConnell co-founded the juice company Orijin of Jamaica.

His eldest son Robert “Bobby” Stewart, held various leadership positions at Sandals, including running its online division and UK operations. Adam Stewart was deputy chairman of Sandals, CEO of The ATL Group, and founded the Sandals Foundation while serving as CEO of Sandals Resorts from 2006 to 2012.

Stewart lived in Kingston and Montego Bay, Jamaica, with his wife Cheryl, the mother of his younger three children: twins, Kelly and Gordon, and a daughter, Sabrina.

Legendary Jamaican entrepreneur Gordon “Butch” Stewart, one of the hospitality industry’s most vibrant personalities and founder of Sandals Resorts International, the world’s leading all-inclusive resort company, has died at the age of 79.

An unstoppable force, who delighted in defying the odds by exceeding expectations, Stewart single-handedly built the world’s most awarded vacation brand from one resort in Jamaica to over two dozen distinct resorts and villas throughout the Caribbean.

According to Breaking Travel News, Stewart’s son, Adam, confirmed his death in a statement.

BREAKING: Iconic Jamaican Businessman and Tourism Mogul, Gordon Butch Stewart is dead. He died tonight in the United States of America. He had been ailing for some time. More details to follow. pic.twitter.com/PC9IZTpI3c