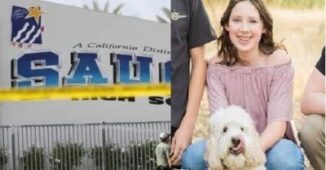 Gracie Anne Muehlberger is identified one of the teenagers shot and killed Thursday in a horrific 16-second attack. She was gunned down by alleged shooter Nathaniel Berhow on Thursday morning at Santa Clarita’s Saugus High School. She was one of several students shot at the Santa Clarita campus by a classmate before classes began on Thursday.

Gracie Anne Muehlberger died two hours after being shot in the #SantaClaritaShooting. She had recently celebrated her 15th birthday.https://t.co/SbG6N71BS4

On Thursday morning, not long before the start of the second period of the school day, a 16-year-old boy pulled a .45-caliber pistol from his backpack and began shooting. Gracie Anne Muehlberger died after being rushed to Henry Mayo Hospital following Thursday morning’s shooting. The Los Angeles County Department of Medical Examiner-Coroner released her name and age Friday.

Investigators are still trying to determine a motive for the shooting. Authorities initially said the female victim who died was 16, but Gracie Anne Muehlberger’s correct age was confirmed by the coroner’s office Friday.

According to a surveillance video, investigators believe that the gunman, identified by sources such as Nathaniel Berhow, walked into the courtyard just after 7:30 a.m., pulled a gun from his backpack and opened fire, hitting five students.

The suspect was shot in the head when he turned 16, according to the Los Angeles County Sheriff’s Department. He was taken to Henry Mayo and was last informed that he was in serious condition.