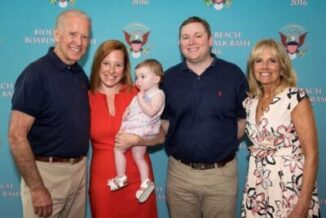 Gregory Mecher is the husband of Jennifer Psaki. Psaki will be one of the most visible members of the new administration after President-elect Joe Biden takes office. Psaki, whose resume includes serving as the White House Communications Director during the Obama administration, was picked to be the new White House Press Secretary.

Mecher was born in September 1976 and was raised in southern Ohio. According to the wedding announcement, Mecher’s mother taught 4th grade at a Catholic elementary school in Cincinnati. His father worked as a mechanical engineer in Hebron, Kentucky.

Mecher listed Elder High School as his alma mater on his Facebook page. It is an all-boys Catholic prep school in Cincinnati.

Mecher stayed local for college. He attended Northern Kentucky University, where he earned a bachelor’s degree in communications and television production in 1999.

Mecher began working in politics as a college student. In a 2018 feature for NKU Magazine, Mecher recalled serving as the “student representative to the Board of Regents.” He said one of his fellow student co-regents helped him secure an internship with Congressman Ken Lucas, who represented Kentucky’s 4th district from 1999 until 2005.

Mecher said that the internship solidified his desire to pursue a career in politics and that he has worked in Washington, D.C. ever since. When he married Psaki in 2010, Mecher was working as chief of staff for Congressman Steve Driehaus of Ohio. Driehaus represented Ohio’s first district for one term, from 2009 to 2011.

Mercer’s most recent position was as chief of staff for Rep. Joe Kennedy III of Massachusetts. Kennedy began serving in Congress in 2013 but lost a bid for the Senate in 2020. He challenged incumbent Senator Ed Markey in the Democratic primary and lost by more than 10 percentage points, NPR reported.

The couple tied the knot in May 2010. The wedding took place at the Woodlawn Farm in Ridge, Maryland, according to the New York Times announcement. A Protestant minister officiated the ceremony.

According to the wedding announcement, Psaki was working as the White House deputy communications director at the time. Mecher worked on Capitol Hill. He was the chief of staff for Democratic Rep. Steve Driehaus of Ohio.

Mecher and Psaki are the proud parents of two young children. While the couple has primarily kept their kids out of the spotlight, Psaki occasionally tweets about them.

Our four year old wanted us to vote for someone who likes kids and animals and is strong pic.twitter.com/s9dn1J6WTf

The couple is raising their two children in Virginia after relocating from Washington, D.C., according to a search of online records. In 2013, Mecher and Psaki purchased a three-bedroom townhouse near Georgetown University for $865,000. They lived there for more than five years before deciding to move. The Washington Post reported the couple sold the townhouse in March 2019 for $919,000.

Who is Emma Ferrer? Wiki, Biography, Age, Spouse, Net Worth

Who is Scooter Braun? Wiki, Biography, Age, Spouse, Net Worth

Who is Catherine Oxenberg? Wiki, Biography, Age, Spouse, Net Worth

Who is Colleen Darnell? Wiki, Biography, Age, Spouse, Net Worth