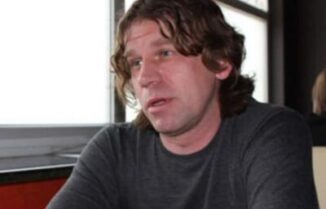 Henadz Mardas was a Belarusian professional football player and coach. He died from bowel cancer on 2nd June 2020. Mardas was born on 12 June 1970 in Minsk, Belarus. his full name is Mardas gennady alexandrovich

Henadz Mardas has died at the age of 53.

Ex-footballer of Minsk Dynamo, Luch, BATE, Neman, Smorgoni Gennady Mardas has died. Tomorrow from 11.00 a memorial service will begin at the address: the city of Smorgon, a ritual hall on 74 Bogushevich Street.

In 2016, Mardas admitted that he has cancer.

“This happened in June of last year. Before, there were just minor symptoms that I didn’t attach importance to. And then my stomach started to hurt. I couldn’t go to the toilet for five days. And the pains. At first, not sharp, and then at night, I got it … He endured, the second one is gone. In the morning the wife says: come on to the Smorgon hospital – nothing helps.

There I was clipped for almost a day: the doctors are with us, of course … It was just lucky that an experienced surgeon Chepyolkin came on duty – about 65 years old. If it weren’t for him, I don’t know what would have happened: to be honest, I could have done anything …

He examined me and began to ask questions. When did he go “in a big way”? Five days ago? And the gases do not go away “Come on with an enema! They tortured me, tormented me – no use. In reality, this state: if I had a gun under my arm, I would have shot myself. As a result, Chepelkin said: that’s it, sign papers that I agree to the operation …

The diagnosis is the cancer of the sigmoid colon. Part of it was cut out, and the other part was brought out – you can’t immediately sew it up.

For six months I went with a special bag. Very hard time. If it were not for the guys from the coaching staff of the BATE base and take, not the team leader Svirsky … Sasha Lisovsky played and worked together in Smorgon after Borisov – they helped me through him. You can’t even imagine how the road was this help.

He was left without work, there were no sick-lists … And when it turned out that everything was more or less normal, the guys went to Borovlyany: he went there for a second operation – he’d already had his stomach closed, ”the football player told Press ball.

We offer our condolences to the family and loved ones.