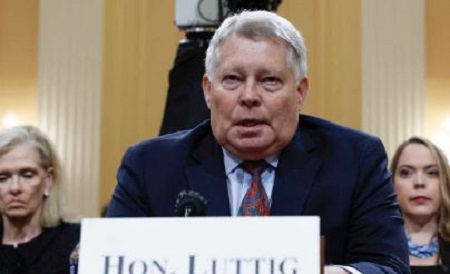 The committee reconvened for its third day of hearings at 1 p.m. Eastern time Thursday, June 16, 2022, after Wednesday’s hearings were postponed. The testimony for that hearing day was moved to the following week.

Thursday’s hearing was centered around allegations that Trump pressured Pence to overturn the 2020 election results on January 6. Luttig was serving as an adviser to Pence. Trump allies, including John Eastman, issued a memo claiming Pence had the power to block the certification of the election of President Joe Biden.

Luttig cleared up confusion among some of Trump’s supporters, saying Pence did not have the power to change the election results.

They are making it crystal clear: Convincing Pence to overturn the election "was the center point" of the insurrection. "America Needs to Know" – Judge Luttig.

"I'd throw my body across the road," before I'd let that happen. "This is constitutional mischief." pic.twitter.com/7kF638ghBr

“The only responsibility and power of the Vice President under the Constitution is to faithfully count the electoral college votes as they have been cast,” Luttig wrote in the tweet on the morning of January 5, 2021.

Luttig also voiced support for Pence during his testimony before the select committee.

“There were many cowards on the battlefield on January 6,” Luttig wrote. “The Vice President was not among them.”

He testified that overturning the election was “the center point” of the attack on the U.S. Capitol.

Luttig had strong words for the House select committee, saying that he would never have let Pence overturn the election.

“I would have laid my body across the road before I would have let a Vice President overturn an election,” Luttig testified.

“Luttig says he would’ve ‘laid my body across the road before I would’ve let the VP overturn the 2020 election,’ Scott Dworkin wrote on Twitter. “I felt that.”

Historian Heather Cox Richardson commented on the significance of Luttig’s testimony due to his reputation among conservatives.

“Luttig says the fake electors had no legal authority,” she wrote on Twitter. “Luttig is incredibly highly regarded in conservative circles. So this is very significant testimony.”

“Luttig says Eastman told Trump that there was both legal as well as historical precedent for the VP to overturn the election,” she added. “Says they all got ‘wrapped around the axle,’ by the historical evidence claim of Eastman.”