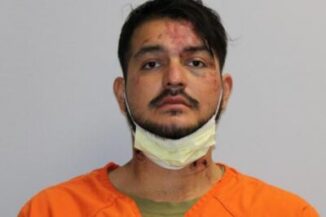 Jaime Arquimides Vaca is a 27-years-old man from Austin, Minnesota. He is facing murder charges following a domestic violence incident that left his stepson dead and his wife severely wounded, a complaint says. His Son stabbed to death while trying to protect his mother from his stepfather, the complaint says.

On the morning of Tuesday, December 15, Austin Police Department officers responded to a report that a male suspect was stabbing someone.

The officers went to the home and found a woman in the front yard “bleeding profusely from a stab wound to her neck,” according to a complaint filed Wednesday at the Mower County District Court.
Officers went inside and found her son on a couch, also covered in blood and struggling to breathe, the complaint says.

They found the suspect, Jaime Arquimides Vaca, 27, in a bathroom holding a knife that he refused to drop, the complaint says.

He was tased, eventually disarmed, and arrested. The mother was flown to a Mayo Clinic hospital in Rochester, “where she underwent extensive surgery to save her life,” according to the complaint. Her son was taken to a local hospital and then flown to the same hospital as his mother, where he later died.

Vaca was also taken to a local hospital for minor wounds. Police found five other children hiding upstairs, according to the complaint. Vaca has been charged with two counts of second-degree murder, one count of attempted murder, and first-degree assault, the complaint says.

Austin Police Chief David McKihan took to social media on Wednesday to comment on the incident. “We do not recall such a short period of time in which the Austin Police Department was involved in as many high profile cases as we have seen recently. There is no commonality in these cases and they illustrate the random nature of what we encounter,” McKihan wrote in a Facebook post.

McLuhan said the stabbing incident is “one of the most challenging and tragic calls I can recall in our City’s history.”

The complaint does not include the identities of the victims, but according to it, the woman said her husband had attacked her and one of her sons with a gray folding knife.
According to the complaint, Vaca told detectives at the hospital that he and his wife had been fighting about his new job.

He said they had been texting each other from separate rooms during the night. On Tuesday morning, he went into their bedroom, where they continued to argue.

Vaca said he “choked” his wife and then he “blacked out,” according to the complaint. He also said that when he began stabbing his wife, his stepson tried to stop the altercation.

Vaca then “swung” at the minor and stabbed him, according to the complaint. In a subsequent interview, a detective asked Vaca if he knew what had happened, and Vaca said he “remembered and understands everything that happened,” the complaint says.

When the detective then told Vaca his stepson had died, he said, “I’m a murderer,” and put his head down. Vaca’s bail was set at $1 million, according to the complaint.