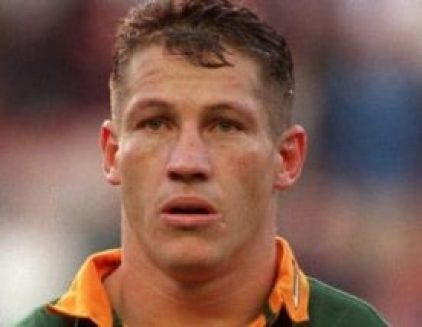 James Small was a former South African rugby union footballer. He played on the wing for the Springboks. His international debut was against the All Blacks in 1992 and he made his final appearance against Scotland in 1997.

After the fall of apartheid, when the Springboks were being taught the lyrics to the new South African national anthem, Nkosi Sikelel’ iAfrika, Small was particularly enthusiastic about learning the lyrics.

He stated that the reason for this was because in his early days of playing rugby, he too was discriminated against, by Afrikaner players for being of British descent rather than Dutch like they were.

When the Springboks visited Robben Island on a tour, Small was very moved by what he saw and visibly wept, recalling later that Thinking about Mandela’s cell and how he spent twenty-seven years in prison and came out with love and friendship.

All that washed over me, that huge realization, and the tears just rolled down my face.

Small’s career was marred by his verbal abuse of others on the rugby field, gaining notoriety as being the bad boy of the Springbok team.

He became the first Springbok to ever be sent off, as a result of dissent towards referee Ed Morison Small was also alleged by his teammate Chester Williams to have uttered racist abuse towards him in his authorized biography, though as an opponent in provincial rugby, not as a Springbok teammate.