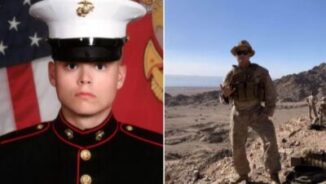 Jared Schmitz was identified by his father, Mark Schmitz, in a St. Louis radio interview as one of the 13 U.S. Marines and service members who died in the attacks in Kabul, Afghanistan, on August 26, 2021. Jared will be remembered as a “true American hero” who had always wanted to serve his country.

Schmitz of Wentzville, Missouri, was among the dead, his father, Mark Schmitz, told the radio station KMOX.

A Marine from the St. Louis area was among the 13 American service members and more than a hundred Afghans killed in a suicide bombing Thursday near Kabul’s Hamid Karzai International Airport senator.

Mark Schmitz Jareds father told St. Louis Today radio, “something he’s always wanted to do, and I’ve never seen a young man train as hard as he did to be the best soldier he can be. That’s a big part of why we are all devastated and sad. Still, there’s so much anger right now because he wasn’t even given that opportunity to demonstrate all the skills he had protected and learned while in the Corps, and he took his job very seriously. Someone came along, took the easy way out, and ended everything for him and us. And the others who killed.”

Schmitz said Jared had only been in Afghanistan for two weeks.

Jared, a young Marine from Missouri was in Afghanistan for just two weeks.

His father said he “has never seen a young man train as hard as he did to be the best soldier he can be.” pic.twitter.com/RzSqNtFsRC

Mark Schmitz said that his son graduated from high school in 2019 and as a Marine in October 2020. He was a Lance Corporal.

Jared, a Marine from Missouri, was among more than a dozen American service members killed in a deadly bombing Thursday at the Kabul airport in Afghanistan.

President Biden said in a news conference that the dead service members were “standing guard at the airport…These American service members who gave their lives are heroes engaged in the selfless mission to save the lives of others.”

He called those who died “part of the bravest, most capable and selfless military on the face of the earth.. the backbone of America, the spine of America, the best the country has to offer. Jill and I, our hearts ache for all those Afghan families who lost loved ones, including small children, in this vicious attack. We’re outraged.”

Schmitz was one of the 13 U.S. Marines and service members who died in the attacks in Kabul, Afghanistan,

The deaths come the day after the U.S. Embassy warned stranded Americans not to go to the Hamid Karzai International Airport because of threats from ISIS, as the Wall Street Journal reported the day before the attacks tore through the city.

Lance Corporal Jared Schmitz was KIA in Afghanistan yesterday. He was 20 years old

His father says: “His life meant so much more. I'm so incredibly devastated that I won't be able to see the man that he was very quickly growing into becoming”