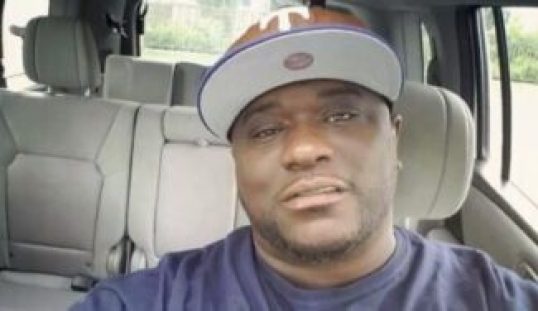 Javier Ambler was the father of two who died in police custody back on March 28th, 2019. His death came three days after George Floyd’s death. Javier was driving home from playing poker when he failed to dim the headlights of his SUV to oncoming traffic.

A Williamson County sheriff’s deputy initiated a stop and began chasing him for the minor traffic violation. After Ambler apparently refused to pull over, a pursuit that lasted 22 minutes and ended when Ambler’s Honda Pilot crashed north of Downtown Austin.

Records obtained by the KVUE Defenders and the Austin American-Statesman reveal that deputies used Taser stun guns on him at least three times, even as he told them multiple times that he had a heart condition and could not breathe.

Javier died after being repeatedly tased as he begged, “I can’t breathe.” His final bolt came after he cried, “Save me,” police footage shows.

“I have congested heart failure!” Javier Ambler repeatedly sobbed as officers ordered him to turn face down on the ground after he was chased for refusing to dim his headlights, the newly released footage shows.

Gasping, the former postal worker then begged several times, “I can’t breathe!” according to the footage of the fatal arrest in Austin last March that only emerged this week.

“I’m not resisting … Sir, I can’t breathe! Please. Please!” he sobbed, as the arrest was filmed by a crew from A&E’s “Live PD,” which is being accused of refusing to release the footage to investigators. “Save me,” Ambler begged, just before a taser was deployed for the final time.

The death has been ruled a homicide — but no disciplinary action or charges have been filed, according to the Austin American-Statesman.

His father Javier Ambler Sr. is a retired Army veteran and his mother, Maritza Ambler is a hospital clerk. The parents said that until last week they had only been told their son died in police custody. “Live PD” never aired the footage.

Ambler’s mother told KVUE-TV that she warned him to be wary when dealing with law enforcement. “I would mention it to him, just to remind him, he is a minority,” she said. “You have that against you, your color.”

His father told the station he has needed help for depression because of the death. “Dads should not have to bury their sons,” he said.

Ambler’s death was ruled a homicide, but there is no indication that the deputies faced any action or were forced to take time off, the reports said.

An autopsy showed he died of congestive heart failure and hypertensive cardiovascular disease associated with morbid obesity “in combination with forcible restraint.”

The police footage and documents only emerged after media pressure from both the Austin American-Statesman and KVUE-TV, they say. Travis County District Attorney Margaret Moore told both media outlets that she plans to present the case to a grand jury.

The DA was also concerned that the TV crew may have influenced the officers’ tactics. The officer who chased Ambler, Deputy J.J. Johnson — who is black — had a “Live PD” crew with him, as did his first-responding backup, Deputy Zachary Camden, who is white.

“It is of very serious concern to any of us who are in law enforcement that the decision to engage in that chase was driven by more of a need to provide entertainment than to keep Williamson County citizens safe,” Moore told the outlets.