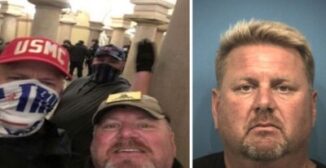 Jeffrey Shane Witcher is a native of Texas., who is arrested in Capitol Riot. His friend Richard Franklin Barnard also arrested.

Both who have been charged in the Capitol riot recorded gleeful — and embarrassing — shots of themselves in the Rotunda that day, boasting that they had “crashed the White House.”

“I am in the White House! We crashed this! Our house! We did it! We did it, family, we did it!” Witcher said in a cellphone video, according to the affidavit.

Witcher eventually got his bearings, and later explained to investigators that he was “so emotional and invested at the moment” that he was confused, recounted FBI agent Mark Winters.

Witcher and Barnard have been charged with a variety of offenses in the Capitol insurrection, including trespassing, disorderly conduct, and disruption of the orderly conduct of government business.