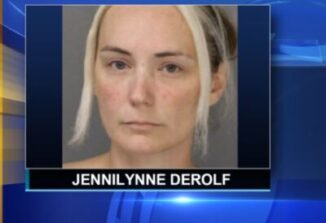 Jennilynne Derolf was a Pennsylvania teacher’s aide who died from a self-inflicted gunshot wound SundayAugust 21st, a month after she was accused of sexually assaulting an underage student, as per a statement.

Derolf began a sexual relationship with a 14-year-old male student, according to a statement from the Bucks County District Attorney’s Office. The statement details that on July 15th, following a complaint from the alleged victim’s grandparents. Derolf was charged with felony counts of involuntary sexual intercourse, statutory sexual assault, unlawful contact with a minor, aggravated indecent assault, and institutional sexual assault. She also faced misdemeanor charges of indecent assault and corruption of minors.

Jennilynne worked as a teacher’s aide at Valley Day School in Falls Township. The school, founded in 1958, is a private school that caters to students with “histories of acute learning, adjustment, behavioral, and emotional needs that are obstacles to achieving success in less restrictive school settings.”

Jennilynne Derolf was working as a Special Education Paraprofessional at Pennsylvania’s Valley Day School since 2019, as per her professional profile. She has also worked as a Special Ed Student Aide with Delta-T Group and as an Office Assistant with Groendyke Transport.

Jennilynne Derolf started her relationship with the 14-year-old student in July.

On Sunday, August 21st, while Derolf was free on bail, she contacted the 14-year-old victim and arranged to meet with him, according to a release from Falls Township police. When the juvenile’s family learned that she was with him, they alerted police, who conducted a welfare check on the boy.

Derolf killed herself with a firearm. The juvenile was not injured. According to a criminal complaint, the investigation into Derolf’s alleged abuse in July 2021, the juvenile told authorities that he and his teacher’s aide would exchange messages through a mobile messaging app and meet up at a nearby park.

The boy said that in June, his relationship with Derolf turned romantic, and in July, they engaged in sexual intercourse in her vehicle three times, the complaint alleges.

Derolf’s case was set to be prosecuted by Deputy District Attorney Matthew Lannetti. Police are still investigating the circumstances surrounding her death.

Tom Coughlin, a former American football coach, and executive revealed Tuesday, August 24th, that his wife, Judy Coughlin, has been diagnosed with a rare, incurable brain disorder that has cost her almost all ability to speak and move. Coughlin and his wife Judy were married in 1967 and have been together for 54 years. The couple share four children and 11 grandchildren. Judy has been by her husband’s side for most of the functions related to his Jay Fund Foundation, which has raised more than $13million for people living with childhood cancer. You can read more about Tom and his wife’s, Judy Coughlin’s condition here.