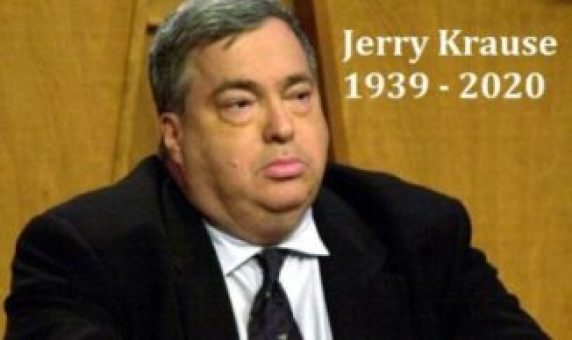 Jerry Krause was the general manager of the Chicago Bulls an American sports executive. Krause’s tenure with the Bulls led by superstar player Michael Jordan included their overwhelming dominance of the NBA during the 1990s. He was the general manager of the Chicago Bulls in the National Basketball Association from 1985 to 2003. He played high school baseball as a catcher at Taft High School in Chicago and attended Bradley University. After college, he went to work as a scout with the Baltimore Bullets. Early on Krause gained a reputation of being able to eye talent.

Krause has died on March 21, 2017, at the age of 77. The Bulls confirmed his death. Jerry died after battling severe health issues, including osteomyelitis.

5 Facts You Need To Know About Jerry Krause

He felt most comfortable on a fishing boat or in a ratty gym. Relaxing on a quiet lake was his hobby; scouting from the bleachers was his essence.

After playing baseball at Taft High and attending Bradley, Krause went to work as a scout for the Baltimore Bullets. Some credited him with discovering Earl “The Pearl” Monroe at Winston-Salem State. He also urged the Bullets to select a forward from North Dakota named Phil Jackson. The team passed.

He was scouting for the White Sox when Bulls Chairman Jerry Reinsdorf called and asked him to return to basketball to succeed Rod Thorn as general manager.

As NBA writer Sam Smith described him in “The Jordan Rules”: “There was Jerry Krause, a humorless man who lived for his job (and) was the object of the anger some players felt toward the Bulls over money. Overweight and sensitive about it, Krause had been the kind of kid who’d had trouble making friends.”

Krause was gruff. He was paranoid. He tried to bully agents during negotiations. He was insecure.

Jordan nicknamed him “Crumbs” for his slovenly appearance.

He also was a loyal friend a devoted family man to his wife, Thelma, and their children, Stacy and David.

“I probably have a softness underneath the toughness that enables me to feel for people,” he told the Tribune’s K.C. Johnson in 2002. “People who know me know I’m a puppy. People who don’t know me think I’m a tough, gruff old guy.”

Krause’ tenure with the Bulls stretched from 1985-2003. He won six championship rings and two NBA Executive of the Year awards by assembling a terrific supporting cast around Michael Jordan, who preceded his arrival by one season.

Krause is blamed for being too eager to break up the team — and for botching the rebuild. He hired fishing buddy Tim Floyd as coach and drafted Elton Brand, Ron Artest, Jamal Crawford and Jay Williams. He traded Brand for the rights to Tyson Chandler and teamed him with another teenager, Eddy Curry.

Krause’s detractors view that ignominious run as proof that the most famous quote attributed to him — “Players and coaches don’t win championships. Organizations do.” — as folly.

A personal tale: I covered Bulls practice on May 15, 1997, during a seven-day gap between playoff series. Jackson revealed he would consider taking a sabbatical after the season — or entertain a reported five-year, $30 million offer from the Magic.

Jackson’s displeasure stemmed from his relationship with Krause: “(We) have not been in sync on what the future of the team.

“I didn’t create this situation. I’m just a party to it.”

I called Krause for comment and he fired back: “I’ve been loyal to Phil since the day I called him when he was out of coaching and didn’t have a job.”

But that’s not exactly what he said. Krause originally put it: “… when he was on the street and didn’t have a job.”

While working on the story, I received a call from Krause’s secretary: “Jerry is on the line for you. Please hold.”

That’s strange, I thought. He was calling me.

We will soon update the Net Worth of Jerry.