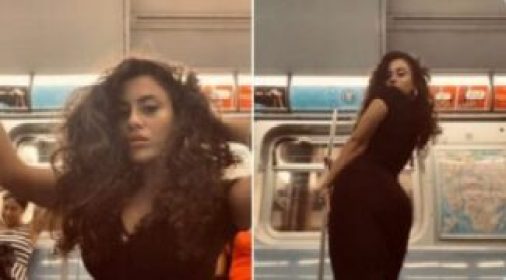 Subway rider Jessiica George is gone viral on social media when she posted a 1 min sultry selfie shoot. She got almost 300,000 likes by Monday morning.

A minute video of commuter Jessica George, from New York, went viral over the weekend, racking up almost six million views and 200,000 likes and retweets.

A fellow commuter Ben Yahr, took to his Twitter account, sharing the short clip, which showed Jessica arranging her cell phone on an empty seat, before standing in front of it and striking a number of poses, as passengers around her looked on in surprise.

This woman giving it ALL to the selfie cam on the train is SENDING ME Ben wrote alongside the popular video.

This woman giving it ALL to the selfie cam on the train is SENDING ME pic.twitter.com/i3JoSPKj3I

The woman who has since been identified as Jessiica George and dubbed Subway Bae on Twitter appears to have her camera propped up against a bag on a train seat as she gives complete dedication to getting the perfect sultry selfie.

Jessiica tweeted Yahr her thanks, with her photos — one a close-up and another a standing pose looking over her shoulder — getting almost 300,000 likes by Monday morning.

“I am overwhelmed by the kind words expressed by everyone and i just want to say THANK YOU to all,” she wrote.