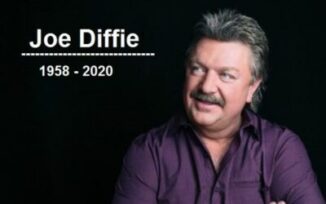 Who is Joe Diffie?

Joe Diffie, a country singer. He had a string of hits in the 1990s with chart-topping ballads and honky-tonk singles like “Home” and “Pickup Man,” died Sunday from complications of coronavirus. He was born on 28 December 1958 in Tulsa, Oklahoma. Mr Diffie is survived by his wife, Tara Terpening Diffie, and seven children from four marriages.

Joe Diffie has died at the age of 61.

Joe’s family moved to San Antonio, Texas, while he was in the first grade, and subsequently to Washington. He attended fourth and fifth grades. Later, he moved to Wisconsin for the years he was in sixth grade through his second year of high school, and back to Oklahoma. He attended high school in Velma.

In his last two years in high school, Diffie played football, baseball, and golf in addition to running track; in his senior year, he was recognized as Best All-Around Male Athlete. After graduating, he attended Cameron University in Lawton, Oklahoma. Although he initially earned credits toward medical school. He decided against a medical profession after marrying for the first time in 1977 and ultimately dropped out before graduation.

Joe Diffie was married four times. His first wife was Janise Parker, whom he married while in college. The couple had two children, Parker and Kara, then divorced in 1986. Parker later worked as Diffie’s on-road manager in the mid-2000s, and in mid-2010, Kara and he auditioned for American Idol.

Two years after divorcing Janise, Diffie married Debbie Jones, a nurse technician. They had two sons, Drew and Tyler, the latter of whom was born with Down syndrome and nearly died in 1991 following complications from a tonsillectomy.

Diffie began an affair with Liz Allison, the widow of NASCAR driver Davey Allison, in 1993. In 1994, a judge ordered Diffie to pay Jones $3,000 per month towards their pending divorce settlement, and not to allow Drew and Tyler to be in the presence of any girlfriend. He divorced Jones in 1996.

In 2000, Diffie married the former Theresa Crump, whom he met at a concert, at the Opryland Hotel in Nashville. They have one daughter, Kylie Tarissa, born in 2004. From 1992 to the early 2000s, Diffie held a charity concert and golf tournament benefiting First Steps, a nonprofit organization for the education of mentally and physically impaired children.

His contributions to this organization won him a Humanitarian Award from the Country Radio Broadcasters in 1997. Diffie later became a country music radio broadcaster himself, fronting a midday program for Tulsa radio station KXBL.

Mr Diffie was a member of the Grand Ole Opry for more than 25 years. His hits included “Honky Tonk Attitude,” “Prop Me Up Beside the Jukebox (If I Die),” “Bigger Than the Beatles” and “If the Devil Danced (In Empty Pockets).”

Diffie is in the Oklahoma Music Hall of Fame and was a member of the Grand Ole Opry for 25 years.
He won a Grammy Award in 1998 for “Same Old Train,” a collaboration with a dozen other artists, including Clint Black, Merle Haggard, Patty Loveless and Randy Travis.

In 1993, Diffie and Mary Chapin Carpenter were nominated for a Grammy for their duet, “Not Too Much to Ask.” He made 13 albums and had more than 20 Top 10 hits to his credit, his publicist said. Sporting a moustache and mullet, his boot-scooting crowd-pleasers included the hits, “If the Devil Danced (In Empty Pockets)” and “Honky Tonk Attitude.”

Joe Diffie died Sunday 29 March 2020 from complications of coronavirus. He has died at the age of 61. Two days before his death, Diffie released a statement saying he had tested positive for coronavirus and was receiving treatment.

“My family and I are asking for privacy at this time. We want to remind the public and all my fans to be vigilant, cautious and careful during this pandemic,” the statement said.

Joe Diffie, one of our best singers and my buddy, is gone,” Tanya Tucker said in a statement. “We are the same age, so it’s very scary. I will miss his voice, his laughter, his songs.”

We are feeling it now. Oklahoma boy Joe Diffie has passed away from this virus. My kids grew up around his parents. My prayers will be with his family. A great traditional voice will live on cuz I’m putting his music on now. Here’s a beer to ya, Joe. Go get your reward. -T

Carrie Underwood said she had “absolutely no words,” adding, “The music and legacy he leaves behind are legendary.”

Absolutely no words for the loss of Joe Diffie. The music and legacy he leaves behind are legendary. Prayers for his family and friends. 💔

Brad Paisley wrote on Twitter that he is “devastated by the loss of my friend.”

“I can’t find adequate words,” Paisley wrote. “But the records he made, that voice, the twinkle in his eye, and our memories cannot be taken away by this disease. Please celebrate his music today everyone, go listen again to his records.”

I’m devastated by the loss of my friend @JoeDiffieOnline. I can’t find adequate words. But the records he made, that voice, the twinkle in his eye, and our memories cannot be taken away by this disease.
Please celebrate his music today everyone, go listen again to his records. pic.twitter.com/OYiyPTbLCy

John Rich of Big & Rich tweeted that Diffie, “was an artists artist. His music was honky-tonk 101 if you wanted to be the real deal in our business. No one ever sang it better, and no one was ever more down to earth and caring for other singers.

The LEGENDARY #JoeDiffie was an artists artist. His music was honky tonk 101 if you wanted to be the real deal in our business. No one ever sang it better, and no one was ever more down to earth and caring for other singers. We'll miss you Joe. @jakeowen @BigKennyTV @cowboytroy pic.twitter.com/HdpOP01NYm